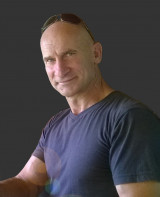 The US has Jack Reacher and the UK, James Bond. Australia has Jo Modeen.

Born in Western Australia and now living in central Queensland with his author wife, Alicia Hope, Frank has penned twelve books in the series with the latest, MODEEN: HUNTERS' MOON, scheduled for a late 2022 release.

To find out more go to http://www.frankhjordanauthor.blogspot.com.au, where you can sign up for Frank’s newsletter and receive a free ebook of the first in the series.

Jo Modeen by Frank H Jordan
Jo Modeen: Beautiful. Noble. Deadly. With a salute to Lee Child's tough-as-nails Jack Reacher and Ian Fleming’s charming but ruthless James Bond, the first book in this high-action series introduces Josephine Dakota Modeen MG. The next books prove why she's the kick-ass heroine we’d all like to have on our side. 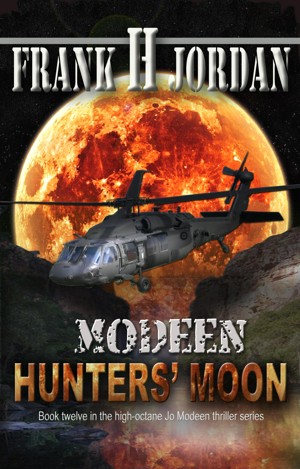 One team, two missions.... When three US Green Berets go missing in Australia’s remote Northern Territory, Modeen’s team is sent to find them. About to embark on the mission, they receive news that close colleague Richard Salt has been assaulted and implicated in a murder. The team splits, determined to both uncover the truth about Salty, and face whatever dangers await them in Arnhem Land. 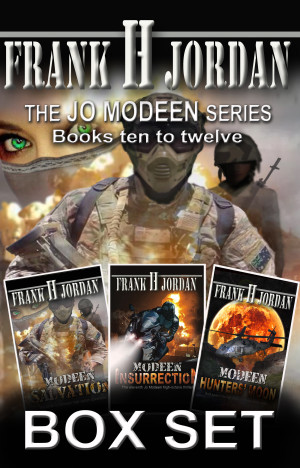 The Jo Modeen Box Set: Books 10 to 12 by Frank H Jordan
Series: Jo Modeen. Pre-release—available December 24, 2022. Price: $9.99 USD. Words: 153,710. Language: Australian English. Categories: Fiction » Adventure » Action, Fiction » Thriller & suspense » Spies & espionage
The fourth box set in the thrilling JO MODEEN series, containing books 10-12. In MODEEN: SALVATION, Ben needs to be found ... and soon. In MODEEN: INSURRECTION, the team is about to face their deadliest foe. And in MODEEN: HUNTERS' MOON, they're one team with two missions in the midst of a pandemic and escalating wars. They'll need to keep their heads in order to succeed in this topical adventure. 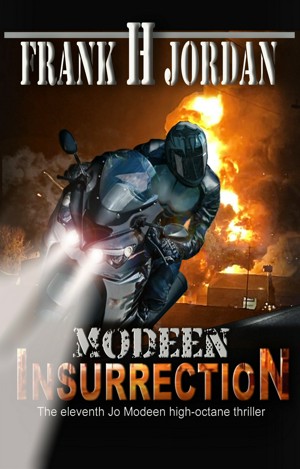 NatSec agents are going missing. When a systems breach is detected, and two covert operatives fail to report in, operations manager Jack Pender dispatches additional agents to provide on-ground assistance. But when those agents and a team leader are found dead in Perth HQ, Jack calls in the big guns, NatSec’s top-ranking team. Jo Modeen's team. Who are about to face their deadliest foe.... 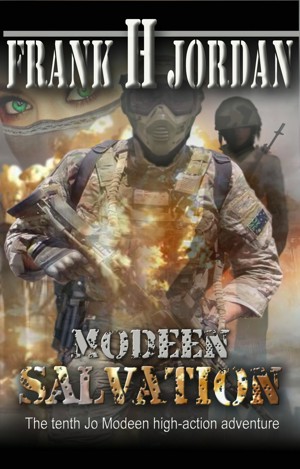 Camp Russell, Afghanistan. A tall figure melts into the mirage shimmering on the desert horizon. Back in Australia, Jo Modeen finds herself dealing with a mission in the midst of a devastating global pandemic, and wondering why Ben has not yet returned from Afghanistan. Given the relentless vilification he has suffered recently, could he have fallen victim to PTSD? He needs to be found. And soon. 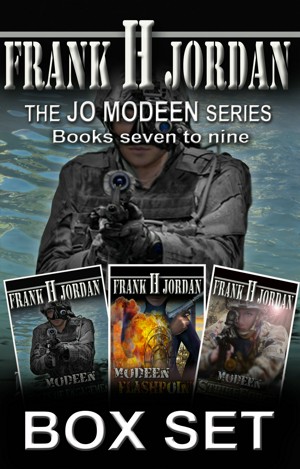 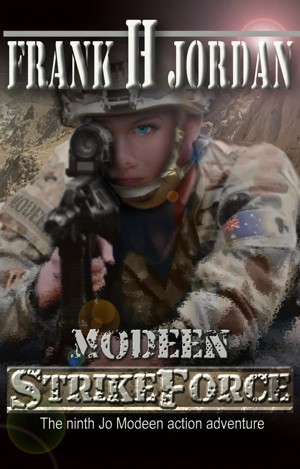 Two US A10 Hogs and a British Apache helicopter are shot down in Afghanistan during a bold Taliban raid, and the pilots captured. With the Brits particularly anxious to re-acquire their pilots, an impressive strikeforce of British SAS and US Night Stalkers is deployed to rescue the captives. An impressive force indeed, but will it be enough? The 9th book in the thrilling Jo Modeen series. 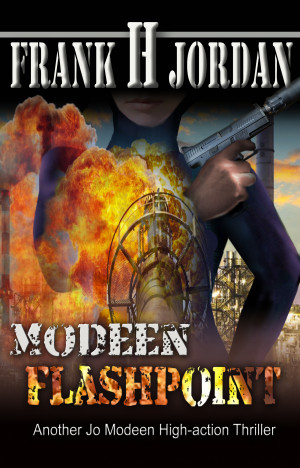 When a tanker is sunk in the Philippine Sea north of Papua New Guinea, the spotlight falls on the lucrative liquefied natural gas market. Believing an international cartel is responsible and that Australia’s LNG plants could be at risk, the CIA contacts NatSec, and Modeen’s team is deployed to gather on-site intel. Who are the saboteurs? What is their next target? And just how far will they go? 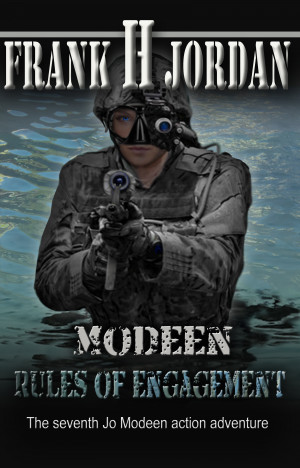 Modeen: Rules of Engagement by Frank H Jordan
Series: Jo Modeen, Book 7. Price: $4.99 USD. Words: 57,280. Language: Australian English. Published: July 30, 2019. Categories: Fiction » Adventure » Action, Fiction » Thriller & suspense » Action & suspense
Honour and truth are worth defending.... After details of a military inquiry into allegations of war crimes are leaked, the media trains its sights on the ‘tallest poppy’, Ben Logan VC. Did Ben and his SASR squad breach the ADF’s Rules of Engagement while on deployment? Could this be simply a media witch-hunt orchestrated to discredit the Australian war hero? Or something more sinister? 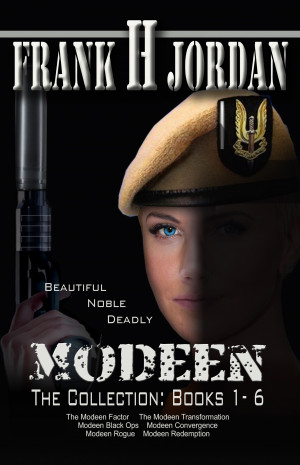 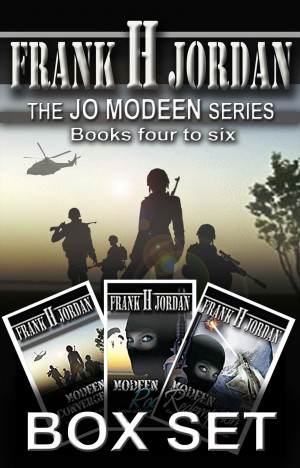 The JO MODEEN series: a crimefest of menacing missions and pump-action suspense. In this boxed set of books 4 to 6 in the series, Modeen’s missions uncover dangerous links to the past. Driven to go rogue, she embarks on a lethal campaign of retribution. And even when drawn into an international case that could alter the course of modern warfare, she maintains her mantra: go hard or go home. 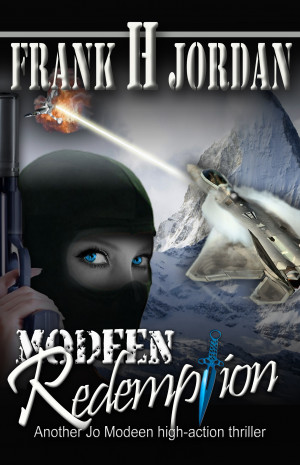 Modeen Redemption by Frank H Jordan
Series: Jo Modeen, Book 6. Price: $3.99 USD. Words: 49,310. Language: Australian English. Published: July 14, 2017. Categories: Fiction » Adventure » Action, Fiction » Thriller & suspense » General
When Wolf and Modeen are targeted by a hit squad, Ben provides what support he can to his two ex-agents. He has more pressing business, however. The US Department of Defence is demanding additional on-ground surveillance at a high-tech Australian laboratory, where testing is underway of the DOD’s latest, most advanced weapon. A weapon they can’t allow to fall into the wrong hands…. 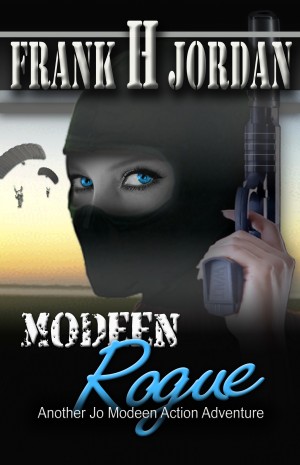 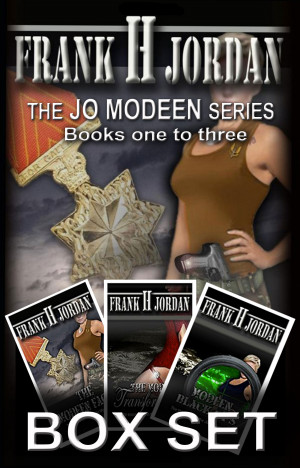 Josephine Modeen: Beautiful. Noble. Deadly. When contacted by her old CO, she knows it’s not a social call. What she doesn’t know is how it will change her life…. The first book in this set of 3 introduces ex-Special Forces soldier Jo Modeen. The next two prove why she's the kick-butt heroine we’d all like to have on our side. Click the BUY button to begin the action-packed adventure today. 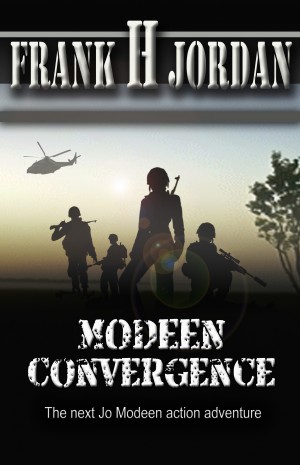 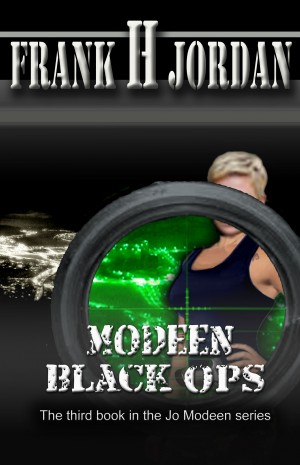 Modeen: Black Ops by Frank H Jordan
Series: Jo Modeen, Book 3. Price: $0.99 USD. Words: 46,630. Language: Australian English. Published: January 28, 2015. Categories: Fiction » Adventure » Action, Fiction » Thriller & suspense » General
Something’s not right about Jo Modeen’s latest mission. But how can she question orders from Ben Logan, a man she wouldn't hesitate to trust with her life? She must decide whether to follow her orders, or her instincts. Under deep cover even from NatSec, Modeen’s team disperses to unravel the web of secrets surrounding the mission, which leads them into the very heart of enemy territory.... 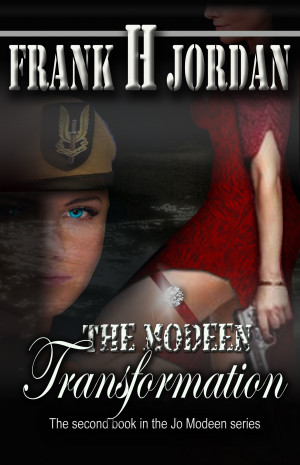 Things just got personal for NatSec agent Jo Modeen. Australian security agencies are on high alert in the lead-up to the G20 Summit. But even NatSec Intel can’t know what the terrorist group 'The Spear of Allah' is planning, something ex-Special Forces soldier and now NatSec agent Jo Modeen is about to discover in a very personal way. And for her, there's more than national security at stake.... 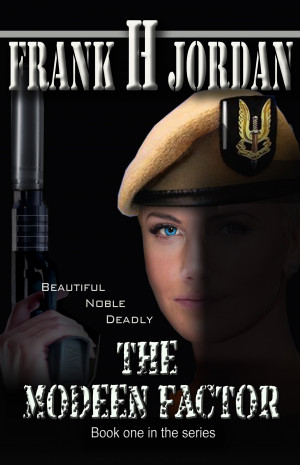 Josephine Dakota Modeen: Beautiful. Noble. Deadly. When unexpectedly contacted by her old CO, ex-Special Forces soldier Jo Modeen knows it's not a social call. What she doesn't know is how it will change her life.... For fans of Child, Baldacci, and Blake comes a new action-packed series with a kick-butt heroine. Click the BUY button to begin the adventure today.

You have subscribed to Smashwords Alerts new release notifications for Frank H Jordan.