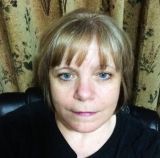 After she encountered strange lights in the sky, GG Atcheson became obsessed with extra-terrestrial life. She often daydreams about possible life in the universe.
When she's not stargazing, she reads, or plays MMORPG on the computer.

Where to find GG Atcheson online

You have subscribed to alerts for GG Atcheson.

You have been added to GG Atcheson's favorite list.

You can also sign-up to receive email notifications whenever GG Atcheson releases a new book.