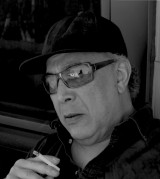 "Decline and Fall of Alternative Civilization" is G. S. Oldman's debut novel. He won't reveal the number of Midwest motorcycles and skateboards he's destroyed, but he has published poems and essays in zines that barely existed, wrote for newspapers, contributed to journals like Thrasher, No Mag, Forced Exposure, Flipside and Option. Filling spaces in X-rated prose and film scripts, however, convinced him not to take his clothes off. In the 1990s, he served time in the backrooms of arts and music promotion in Austin, TX (since someone had to write those blurbs, bios and phony reviews) but after Hurricane Katrina, he escaped back to the heartland where all hell did not break loose, and no one could claim the wreck of the Deepwater Horizon was his fault. Mr. Oldman now lives somewhere in Michigan searching for secret U-boat bases.

Is it true you've released a new version of your novel?
Not totally *NEW* but it did go through a serious revision and lost about 7-8000 words. It took putting something out before I had a distanced perspective on what the hell I'd been dealing with. There were doubts about what I had ended up with and, making that publishing commitment, I finally had a feel for where it needed some work. Time, man... time. The story didn't change, but the internal elements got pounded into a leaner, more rhythmic form that'll serve the audiobook version better.
So it's an audiobook now?
Not yet. But it's been in production the past few months. My secondary editor—a full-on audio guy—convinced me that the text was based on so many different levels of speech patterns that they'd get lost within the confines of a "static" page. He understood how the original ideas came out of very musical, rhythmic, and poetic movements. It's all based on things that really happened in the mid-1990s, and I was knocking myself out on satisfying literary "ideals" of genre, plot arcs, formulas... whatever. There really are no rules, and it finally made more sense to not worry about wrongness rather than be obsessed with doing everything "right." Kinda like cooking. Occasionally, you need more grease, not less.
Read more of this interview.

Decline and Fall... audil
This is the reading of the Prologue that Spot did. Lot more of this to come. Maybe an audio book project in the making? 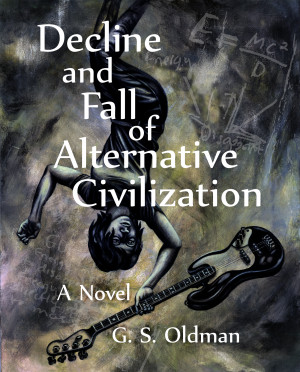 Decline and Fall of Alternative Civilization by G S Oldman
Price: $0.99 USD. Words: 89,850. Language: English. Published: March 30, 2016. Categories: Fiction » Literature » Literary
Lofty, improbable thoughts. This should never have been a novel. But it is. Sorry. "Decline and Fall of Alternative Civilization" is literary fiction that may appeal to misguided men, unsettled women, disgruntled music enthusiasts and anyone fond of examining the strings from which physicists' yoyos spin.

You have subscribed to alerts for G S Oldman.

You have been added to G S Oldman's favorite list.

You can also sign-up to receive email notifications whenever G S Oldman releases a new book.