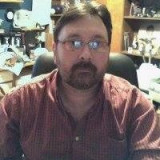 Robert W. Tompkins has been called "fantasy's best kept secret." He is the author of The Hagenspan Chronicles, as well as a couple of non-fiction books.

He was born in 1959 in upstate New York, where he has lived most of his life. He wrote over four hundred songs in his youth, and turned to fiction around the beginning of the current century. He pastored a small rural congregation for five years, and is now retired from most things due to early-onset Parkinson's Disease. However, he does continue writing, and is currently beginning work on the tenth book in the Hagenspan series.

Tell me about some books you read when you were a child.
I remember reading a book called The Little Boy from Shickshinny. I don't believe I liked it very much at all, but I read it over and over; it's possible it was my only book. When I was a little older, I read Wild Animals I Have Known, which made a tremendous impact on me. I liked it so much I sought it out a couple of years ago and found a copy. I enjoyed reading it as much when I was in my 50s as I did when I was a child. Later on I remember a book called The Bear at the Hunters' Ball, which I highly recommend, both for its subtle good humor and its hilarious illustrations.
When did you first start writing?
I first started writing a column in my company's newsletter called "The Last Word." I was kind of a wise guy and had a quirky sense of humor, and the bosses there allowed me to contribute until I strayed a little too far outside the bounds of the company's sensibilities. But it was there that I first got the idea that other people might enjoy my handling of the language and my sprinklings of humanity.
Read more of this interview.

You have subscribed to alerts for Robert W. Tompkins.

You have been added to Robert W. Tompkins's favorite list.

You can also sign-up to receive email notifications whenever Robert W. Tompkins releases a new book.