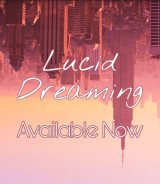 Heather Blair is a self published indie romance author originally hailing from Vermont.

She has been writing ever since her first manuscript, The Tale of Chowder the Cat, garnered rave reviews from her parents and first-grade teacher, Mrs. Currier.

Blair holds a degree in Theater Arts from Castleton University. She has lived in both New York and Los Angeles and has worked for such companies as Disney, Warner Bros. and Cirque du Soleil.

In her free time she dabbles in freelance voice over, podcasting and other hobbies that allow her to fangirl about the multitude of fandoms she belongs to.

She currently resides in Connecticut with her two cats.

What's the story behind your debut novel?
'Lucid Dreaming' is a love story with a healthy mix of comedy, drama and sex. What I think makes the book stand out from many other romantic novels is that (most) of the sex scenes are plot driven. Every decision, every word and movement tells the reader something about what the characters have been through and how that is effecting them in the relationship. Sex is almost another character in this book!

This book is also very much about human nature, sexual assault survivors, post traumatic behavior and mental illness. I think these devices are important in understanding the motivations of the characters. And while many pre-existing tropes can be found in the plot, I think old tales can be enjoyed again and again if they're told in a fresh, new way.

I am very proud of my characters and I worked hard to flesh them out as three dimensional humans. Our heroine, Alison, has lived an easy life, but she is very self-aware. The love interest, Quinn, has not had such an easy life, and his past manifests itself into some unorthodox behaviors. Even so, he maintains just enough optimism to devote himself to rising above his roots and making a positive impact on the world.
What is your writing process?
I get excited about some random scene in my head-- so I write it out-- then I add the rest piece by piece. Essentially, I begin in the middle then work my way forward and backward. Odd, I know. I'm the only one I know who writes this way, but it works for me!
Read more of this interview.

Where to find Heather Blair online

You have subscribed to Smashwords Alerts new release notifications for Heather Blair.

You have been added to Heather Blair's favorite list.

You can also sign-up to receive email notifications whenever Heather Blair releases a new book.