Sherif G. Awadalla, M.D.
Dr. Awadalla serves as Medical Director at the Institute for Reproductive Health (IRH). He is also co-director of the In Vitro Fertilization program at IRH, and holds the title of Volunteer Assistant Professor in the Division of Reproductive Endocrinology and Infertility in the department of Obstetrics and Gynecology at the University of Cincinnati College of Medicine. Previous positions include Director of Reproductive Research at Bethesda Hospital, Assistant Professor of Obstetrics and Gynecology at West Virginia University, and Medical Director for the In Vitro Fertilization Program at West Virginia University. Dr Awadalla has conducted and published numerous research projects in the areas of endometriosis, microsurgery, infertility, in vitro fertilization, GIFT, ovulation induction, and gamete maturation. His current areas of interest include leading edge treatments of infertility such as in vitro fertilization with all of its variation. He is active in pelvic reparative surgery both by microsurgical techniques, such as tubal reversal surgery, as well as laparoscopic laser and robotic techniques.

Michael D. Scheiber, MD, MPH, FACOG
Dr. Scheiber has authored numerous peer-reviewed articles as well as book chapters, and currently serves as the Co-Director of In Vitro Fertilization Services and the Director of Reproductive Research at the Institute for Reproductive Health in Cincinnati, Ohio. He also serves as Volunteer Associate Professor of OB/GYN at the University of Cincinnati, and on the Editorial Board of the Journal of Gynecologic Surgery. Previously, he served as the Director of Women’s Health at the Palau Community Health Center in Koror, Palau. Dr. Scheiber has received multiple awards and recognition, including the Ortho Pharmaceutical Award for Excellence in Research as well as the Berlex Foundation Award for Resident Education. His professional interests include IVF-embryo transfer, preimplantation genetic diagnosis, ovulation induction, PCOS, and laparoscopic/ hysteroscopic surgery. He lives in Cincinnati with his wife of more than 20 years and their three wonderful daughters. 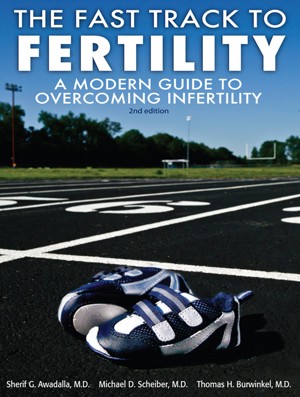 The Fast Track To Fertility, A Modern Guide To Overcoming Infertility by Sherif Awadalla
Price: Free! Words: 78,420. Language: English. Published: February 25, 2012. Categories: Nonfiction » Health, wellbeing, & medicine » Fertility & Conception, Nonfiction » Health, wellbeing, & medicine » Reference
This clear, comprehensive guide to infertility offers the latest information on diagnosis, treatment options, medications, and advanced procedures. It will not only answer most fertility questions, but also prepare you to get the most out of your next doctor's appointment. The Fast Track approach stresses accurate diagnosis, and timely treatment, to achieve the best results!

You have subscribed to alerts for Sherif Awadalla.

You have been added to Sherif Awadalla's favorite list.

You can also sign-up to receive email notifications whenever Sherif Awadalla releases a new book.