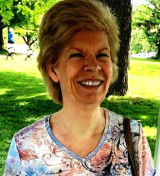 I live in a large city in Ontario, Canada after many years of training horses in the country. Once I sold my training facility, where I also taught riding and ran a children's riding camp, my life became very quiet. Like most mothers, I never see my 4 adult children enough.

I like to read and review books. Romantic suspense is my preferred genre with romantic comedy being a close second.

Where to find JAB44 online

You have subscribed to alerts for JAB44.

You can also sign-up to receive email notifications whenever JAB44 releases a new book.