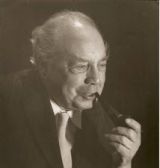 John Boynton Priestley, OM (13 September 1894 – 14 August 1984), known as J. B. Priestley, was an English novelist, playwright and broadcaster. He published 26 novels, notably The Good Companions (1929), as well as numerous dramas such as An Inspector Calls (1945). His output included literary and social criticism.

Priestley was born at 34 Mannheim Road, Manningham, which he described as an "ultra-respectable" suburb of Bradford.[1] His father was a headmaster. His mother died when he was just two years old and his father remarried four years later.[2] Priestley was educated at Belle Vue Grammar School, which he left at sixteen to work as a junior clerk at Helm & Co., a wool firm in the Swan Arcade. During his years at Helm & Co. (1910–1914), he started writing at night and had articles published in local and London newspapers. He was to draw on memories of Bradford in many of the works he wrote after he had moved south, including Bright Day and When We Are Married. As an old man he deplored the destruction by developers of Victorian buildings in Bradford such as the Swan Arcade, where he had his first job.

Priestley served during the First World War in the 10th Battalion, the Duke of Wellington's Regiment. He was wounded in 1916 by mortar fire. In his autobiography, Margin Released he is fiercely critical of the British Army and in particular of the officer class.

After his military service Priestley received a university education at Trinity Hall, Cambridge. By the age of 30 he had established a reputation as a humorous writer and critic. His novel Benighted (1927) was adapted into the James Whale film The Old Dark House (1932); the novel has been published under the film's name in the United States.

Priestley's first major success came with a novel, The Good Companions (1929), which earned him the James Tait Black Memorial Prize for fiction and made him a national figure. His next novel, Angel Pavement (1930), further established him as a successful novelist. However, some critics were less than complimentary about his work, and Priestley began legal action against Graham Greene for what he took to be a defamatory portrait of him in the novel Stamboul Train (1932).

In 1934 he published the travelogue English Journey, which is an account of what he saw and heard while travelling through the country in the autumn of the previous year.[3]

He moved into a new genre and became equally well known as a dramatist. Dangerous Corner was the first of a series of plays that enthralled West End theatre audiences. His best-known play is An Inspector Calls (1945), later made into a film starring Alastair Sim released in 1954. His plays are more varied in tone than the novels, several being influenced by J. W. Dunne's theory of time, which plays a part in the plots of Dangerous Corner (1932) and Time and the Conways (1937).

Many of his works have a socialist aspect. For example, An Inspector Calls, as well as being a "Time Play", contains many references to socialism — the inspector was arguably an alter ego through which Priestley could express his views.[4]Priestley’s ‘Inspector Calls’ appears to simply tell the story of a young girl called Eva Smith and her tragic suicide. However, in reality it is much more than that. It 'hits you over the head' with his views on socialism'.

During World War II, he was a regular broadcaster on the BBC. The Postscript, broadcast on Sunday night through 1940 and again in 1941, drew peak audiences of 16 million; only Churchill was more popular with listeners. But his talks were cancelled. It was thought that this was the effect of complaints from Churchill that they were too left-wing; however, Priestley's son has recently revealed in a talk on the latest book being published about his father's life that it was in fact Churchill's Cabinet that brought about the cancellation by supplying negative reports on the broadcasts to Churchill.[5][6]

Priestley chaired the 1941 Committee, and in 1942 he was a co-founder of the socialist Common Wealth Party. The political content of his broadcasts and his hopes of a new and different England after the war influenced the politics of the period and helped the Labour Party gain its landslide victory in the 1945 general election. Priestley himself, however, was distrustful of the state and dogma.

Priestley's name was on Orwell's list, a list of people which George Orwell prepared in March 1949 for the Information Research Department, a propaganda unit set up at the Foreign Office by the Labour government. Orwell considered these people to have pro-communist leanings and therefore to be inappropriate to write for the IRD.[7]

He was a founding member of the Campaign for Nuclear Disarmament in 1958.

In 1960, Priestley published Literature and Western Man, a 500-page survey of Western literature in all its genres, including Russia and the United States but excluding Asia, from the second half of the 15th century to the present (the last author discussed is Thomas Wolfe).

Although Priestley never wrote a formal book of memoirs, his literary reminiscences, Margin Released (1962), provide valuable insights into his work. The section dealing with his job as a teenage clerk in a Bradford wool-sorter's office manages to weave fine literature from an outwardly unpromising subject — a characteristic of many of his novels.

His interest in the problem of time led him to publish an extended essay in 1964 under the title of Man and Time (Aldus published this as a companion to Carl Jung's Man and His Symbols). In this book he explored in depth various theories and beliefs about time as well as his own research and unique conclusions, including an analysis of the phenomenon of precognitive dreaming, based in part on a broad sampling of experiences gathered from the British public, who responded enthusiastically to a televised appeal he made while being interviewed in 1963 on the BBC programme, Monitor.

Priestley was one of the interviewees for the documentary series The World at War (1973), in the episode "Alone: May 1940 – May 1941". He declined lesser honours before accepting the Order of Merit in 1977.

The University of Bradford awarded Priestley the title of honorary Doctor of Letters in 1970, and he was awarded the Freedom of the City of Bradford in 1973. His connections with the city were also marked by the naming of the J. B. Priestley Library at the University of Bradford, which he officially opened in 1975,[8] and by the larger-than-life statue of him, commissioned by the Bradford City Council after his death, and which now stands in front of the National Media Museum.[9]

A special collector's edition of Bright Day was re-issued by Great Northern Books in 2006, celebrating the 60th anniversary of the publication of this novel.[10]

Priestley had a deep love of classical music, and in 1941 he played an important part in organising and supporting a fund-raising campaign on behalf of the London Philharmonic Orchestra, which was struggling to establish itself as a self-governing body after the withdrawal of Sir Thomas Beecham. In 1949 the opera The Olympians by Arthur Bliss, to a libretto by Priestley, was premiered.

Priestley snubbed the chance to become a lord in 1965 and investiture as a Companion of Honour in 1969.[11] But he did become a member of the Order of Merit in 1977. He also served as a British delegate to UNESCO conferences. He was honoured by both the Universities of Birmingham and Bradford and the city of Bradford granted him Freedom of the City in 1973.

He married three times. In 1921 he married Emily "Pat" Tempest, a music-loving Bradford librarian. Two daughters were born, one in 1923 and one in 1924, but in 1925 his wife died of cancer.[12] In September 1926, he married Jane Wyndham-Lewis (ex-wife of the original 'Beachcomber' D. B. Wyndham-Lewis, no relation to the artist Wyndham Lewis); they had two daughters and one son. In 1953, he divorced his second wife and married the archaeologist and writer Jacquetta Hawkes, his collaborator on the play Dragon's Mouth.[6]

Where to find JB Priestley online 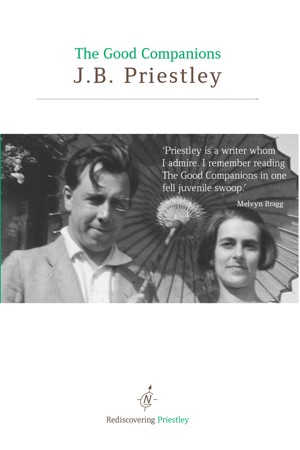 Good Companions by JB Priestley
Price: $9.99 USD. Words: 266,160. Language: English. Published: November 11, 2012 by Great Northern Books. Categories: Fiction » Adventure » General
Three unhappy characters, Jess Oakroyd, Miss Trant and Inigo Jollifant flee from their old lives to seek adventure on the open road. Fate brings them together and into the presence of a broken-down theatrical touring company. Throwing caution to the winds they save the group and set off on an unforgettable tour of the pavilions and provincial theatres of England.

You have subscribed to alerts for JB Priestley.

You have been added to JB Priestley's favorite list.

You can also sign-up to receive email notifications whenever JB Priestley releases a new book.