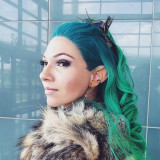 On a cold winter night, wind howling into the desert sky, one ordinary hospital gave witness to a historic event. JJ Sherwood was born at 2:30 a.m. on December 31st, just barely managing to squeeze in to supplant New Year’s Eve. JJ has always had a flair for the dramatics.

Sherwood began writing in the womb after a harrowing incident in which Mother Sherwood swallowed a pen—and thus, destiny was born. JJ’s first work was completed by the age of 5: a riveting tale of a duck attempting to climb into an apartment during the pouring rain. Unfortunately this book is not in print, but it served as the first spark that spurred on a lifetime of creativity.

Much of JJ’s childhood was spent tearing through the woods, playing out fantasy worlds, and tying Barbie to the roof so that the Power Rangers might rescue her. Middle and high school carried on this roleplaying, while college encompassed creating and refining over 250 characters in the world of Aersadore.

After escaping college, finally armed with the tools of the trade and a lifetime of development, JJ set to writing what would become the Steps of Power series: it was then that Eraydon slew his first dragon, Jikun battled the warlord Saebellus, and Taranus rebelled against his brother’s throne.

When not orchestrating the lives and deaths of the people of Aersadore, JJ’s hobbies include drawing, video gaming, wearing a bathrobe, and eating too many baked potatoes. JJ Sherwood lives in Cincinnati, Ohio with one loving and extremely patient spouse, a bearded dragon, a monk parakeet, and four cats who look far too similar.

Where to find JJ Sherwood online

Steps of Power by JJ Sherwood
Welcome to Aersadore, a world of magic and intrigue, elves and demons, dragons and gods. Millennia of magic, war, and legends have shaped a complex past and an unstable future. Now the shift in power ripples outward yet again, promising intrigue, action, and adventure for those swept up in the conflict. And even more for those who dare to shape it. 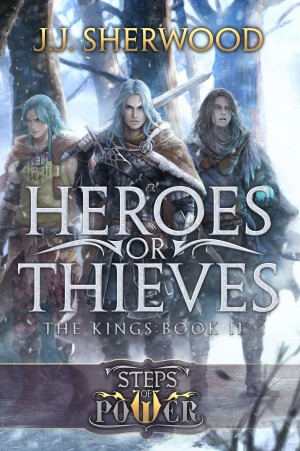 Heroes or Thieves (Steps of Power: The Kings Book 2) by JJ Sherwood
Series: Steps of Power. Price: $9.99 USD. Words: 183,230. Language: English. Published: November 1, 2016. Categories: Fiction » Fantasy » Epic
A dark and ancient magic has resurfaced upon Aersadore, and it serves the new lords of the elven nation. Disgraced and on a land far from home, Jikun yet finds himself in the midst of Sevrigel's inner turmoil. When he accepts the siren call to rectify his past mistakes, he soon determines that to walk the path of the hero, he must first become the thief. 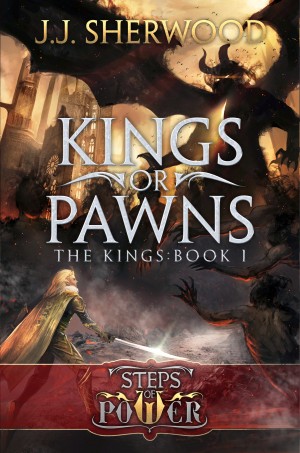 You have subscribed to alerts for JJ Sherwood.

You have been added to JJ Sherwood's favorite list.

You can also sign-up to receive email notifications whenever JJ Sherwood releases a new book.