Depending on who you believe ...

John M. Dennis was born and raised all along the East Coast of the United States of America. He attended college and graduate school, enlisted in the US Armed Forced and has worked in a variety of careers before persuing his lifelong dream of writing.
John currently lives in Virginia's Northern Shenandoah Valley with his wife of over 25 years. Together they have a son who lives in Southern California, in whom they are both extremely proud.

John M. Dennis has existed for thousands of years in a universe of his own creation. His childhood compainions were the likes of Jules Verne, H. G. Wells, Ray Bradbury, Isaac Azimov and Arthur C. Clark, not particularly in that order. His formal education took place in the Restaurant at the End of the Universe at the feet of Stephen King, John Milton, Alex Haley, William Shakespeare and Umberto Eco.
John currently lives in a small village somewhere on the planet of Qet'esh where he is monitoring the situation there after a few dozen humans have arrived and shaken things up. He is recording his findings in a Chronicle which will soon be available at a major eBook retailer near you.

Which version do you think is true? 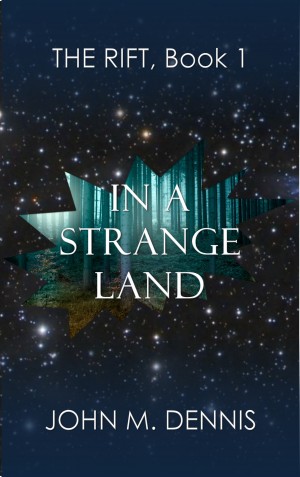 In a Strange Land by John M. Dennis
Price: $2.99 USD. Words: 93,280. Language: English. Published: November 16, 2014. Categories: Fiction » Science fiction » Adventure
Seventy-eight astronauts find themselves on an alien world and are taken in by a highly civilized reptilian species, who welcome them into their midst. Despite their peaceful natures, these gracious hosts conceal a mysterious past that could prove risky as the stranded humans endeavor to adapt to their new home.

You have subscribed to alerts for John M. Dennis.

You have been added to John M. Dennis's favorite list.

You can also sign-up to receive email notifications whenever John M. Dennis releases a new book.