To their shock and dismay Michael, a Mixed Martial Arts fighter preparing for his second fight, was given 30 days to live when he stepped into the cancer ring to begin the fight of his life. Without insurance, the first emergency room visit cost them $44,000.

Michael and Jacqueline qualified for MediCal, but it was a weekly fight to keep it. Without that insurance, Michael would have died within the first month of his diagnosis.

The next two years were the battle of a lifetime as Jacky fought to keep her husband on MediCal and Michael fought to stay alive. She researched every possible kind of therapy available to them. They embraced traditional and holistic therapies alike, refusing to leave one possibility untried. Jacky changed the family diet completely, learned how to give injections, even grew flats of wheat grass, while Michael tried to maintain his fitness between treatments.

Their friends rallied around them, throwing one fundraiser after another to help them meet the expenses of daily life when Michael was undergoing treatment. These friends said they very much enjoyed fundraising because they could see where their efforts were going.

It was during this time that Jacky decided to dedicate herself to helping other cancer patients when this ordeal was over. Her dream was to create relationships between donors and the cancer patients they help so they can see and share in the experience of the help they provide.

Today, Michael is cancer-free and Jacky has created Fighters 4 Life, a non-profit organization dedicated to supporting cancer patients, their families and caregivers – emotionally and physically. It raises funds to help them meet the on-going expenses of everyday life during treatment.

The Kinds of Things Fighters 4 Life Has Helped With

To name a few of the things that Jacky Kreple and Fighters 4 Life do:

• I have helped Cancer Fighters from age 2 to age 80, each according to what they need.
• I support Cancer Fighters with financial aid during treatment.
• I spent a week in a hotel in Chicago with a woman who was receiving radiation of her eye. I didn’t want her to be alone.
• I have spent nights and days in emergency rooms supporting cancer patients.
• I go to doctor’s appointments with cancer patients, whether the appointments are surgery, checkups or chemotherapy.
• I’m a cancer coach. I coach cancer patients, caregivers and their families through their cancer journeys – whether it’s to remission or the passing of a loved one.
• I have teamed up with other organizations to help bring the first Cancer Treatment Center to the horn of Africa in Tanzania.
• I am researching the possibility of bringing preventative treatment and awareness of cervical cancer to Indonesia.

Where to find Jacqueline Kreple online 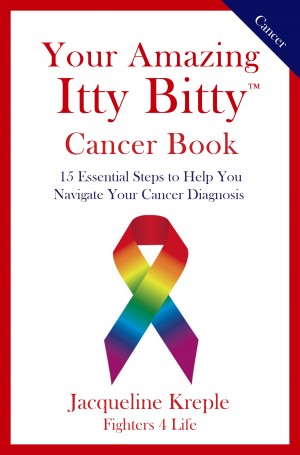 Your Amazing Itty Bitty(R) Cancer Book by Jacqueline Kreple
Price: $2.99 USD. Words: 4,940. Language: English. Published: August 10, 2016 by S & P Productions, Inc.. Categories: Nonfiction » Health, wellbeing, & medicine » Cancer
The 15 Facts covered in this Amazing Itty Bitty Book are where you start when you first receive a diagnosis of cancer. What you need to know is that Michael Kreple, my husband, was diagnosed with Non-Hodgkins Lymphoma at the age of 40 and was given 30 days to live. Today he is in full remission. That’s why, as soon as you can, it’s essential to get into the mindframe that thinks,

You have subscribed to alerts for Jacqueline Kreple.

You have been added to Jacqueline Kreple's favorite list.

You can also sign-up to receive email notifications whenever Jacqueline Kreple releases a new book.