James T. Crouse was born in Asheville, North Carolina and grew up in the small town of Lexington, N.C. He was graduated from Randolph-Macon Academy in Front Royal, Virginia, a military preparatory school, after which, as an Army ROTC Scholarship student, earned his B.A. in Political Science at Davidson College.

Upon graduation from Davidson, Mr. Crouse was commissioned in the U.S. Army as an Infantry officer, and attended helicopter flight school and Aviation Maintenance Officer Course and Test Pilot School as a Transportation Corps officer. During his initial six-year active duty career, he flew research and development flights for the Army’s Night Vision Laboratory. He retired as a Lieutenant Colonel after having flown over 1500 hours in his 26-year active and reserve career, performing medical evacuation, attack, and maintenance test flight duties.

Since graduating from Duke Law School in 1980, Mr. Crouse has practiced aviation and product liability law in which time he has represented several high-profile clients and was lead liability counsel in the world’s largest civilian helicopter disaster (North Sea Boeing 234LR, 1986). Other notable experience includes major airline accident cases and general aviation, helicopter, and military crashes, as well as non-aviation mass disaster litigation. Over his career he has investigated over three hundred aviation crashes.

Mr. Crouse has co-authored a case law book, Aviation Law: Cases and Materials, which is critically acclaimed by scholars and practitioners. He is the editor-in-chief of Aviation Safety Blog, http://aviationsafetyblog.com/, which is devoted to reducing aviation accidents, and is a published aviation and Civil War book reviewer for The Times of London Higher Education magazine.

He lives in Raleigh, North Carolina with his wife and three children.

When did you first start writing?
BROKEN EAGLE comes after writing for as long as I can remember--at least back to my early teens. I remember a few early poems then OpEd pieces to my hometown newspaper which at times created quite a stir due to their subject matter.
What's the story behind your latest book?
BROKEN EAGLE emerges from my long-standing inspiration to take action when I see injustice--often via pen, typewriter or computer. My decision to become a lawyer was fueled by this same motivation. Representing the families of people killed or individuals injured in aviation disasters and other accidents has only reaffirmed the goal of telling the stories of people harmed by the negligence and intentional acts of people, corporations and governments that often act with impunity.
No group is more unfairly affected than our military men and women. When the products they have no choice but to use injure or kill them, they find out that they have far fewer rights to recover for their injuries than their civilian neighbors. Trying to get redress, they face a phalanx of laws, rules and court decisions that greatly narrow their paths to recovery. What iss worse, unlike the civilian world, the findings of the post-event investigations are kept from them, based in part on the strange notion that truth is more likely to emerge in a secret process than in an open one. So, military people and their families face the double insult of not being able to recover for their loss and not knowing what really happened,
So, it was time to tell this story. We need to rethink how we treat the fine men and women who sacrifice their time, energy and lives for us on a daily, 24/7 basis. We need to change the laws and make accountable the manufacturers, government officials and agencies that currently are untouchable. We must make sure the military has the best products and ensure that when something is defectively designed or manufactured and service people are injured they have the same rights to be made whole as the people whom they protect
Read more of this interview.

Where to find James Crouse online 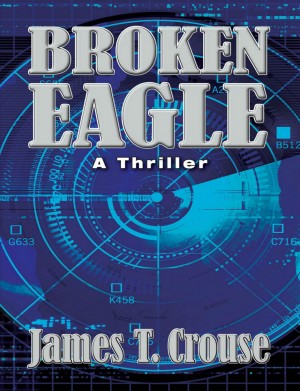 Broken Eagle by James Crouse
Price: $3.99 USD. Words: 83,050. Language: English. Published: June 6, 2016. Categories: Fiction » Thriller & suspense » General, Fiction » Mystery & detective » General
A fast-paced, legal-military-aviation thriller about southern attorney Jake Baird, a former Army helo pilot, whose quiet law practice is blown apart when a disheveled ex-military officer gives him a folder of classified documents about the fatally flawed Sea Eagle developmental aircraft. Jake finds himself is in the fight of his life—for himself and his client, the widow of a Marine pilot.

You have subscribed to alerts for James Crouse.

You have been added to James Crouse's favorite list.

You can also sign-up to receive email notifications whenever James Crouse releases a new book.