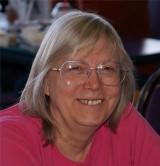 Janice Clark lives in the Pacific Northwest, where the morning fog drifting over the coastal hills could easily conceal dragons or any number of magical creatures. She and her brother share a home on partially wooded acreage, frequented by a variety of birds, deer, squirrels, rabbits, raccoons, the neighbor’s free-range chickens, and several cats who hunt the area. She does not currently own (or is not owned by) a cat or any other four-footed being. Frequently-resident grandchildren and a large garden are sufficient to occupy any time not taken up by writing. Her published books include the Hall of Doors series, "Fairy Gold," "Molly the Bee-keeper's Daughter and other stories," and "A home Where God Lives" (co-authored with Anita Donihue). She also has contributed short stories to three Crimson Cloak anthologies: Glodwyn's Treasure Chest, Steps in Time, and Love Matters.

Where to find Janice Clark online

You have subscribed to alerts for Janice Clark.

You have been added to Janice Clark's favorite list.

You can also sign-up to receive email notifications whenever Janice Clark releases a new book.