Jay Whett uses her storytelling skills in cubicles and conference rooms throughout the Silicon Valley and around the country, trying to help Internet start-ups and struggling web-based businesses of all sizes generate a coherent vision and articulate a clear path to success. Once back home, she writes dirty stories late into the night, usually after a bit too much wine.

Her stories explore, at least on some level, the ambiguities of life – and especially sex. Ambiguous motivation, desire and consent. Sometimes ambiguous sexuality. Most have ambiguous endings, because ‘happily ever after’ is often only a fleeting moment.

Many of her stories are told from the first person, although this seems to annoy some people and she has promised to explore other points of view in the future. But if that bothers you, please beware.

None of her stories are especially autobiographic, although she has high hopes for several to become so someday, perhaps when she has more spare time. For extra credit, you can try to guess which ones.

Jay thinks there are way too many tales out there of perfect fucks. Double-D barely-legal blond beauties and chiseled hunks hung like a donkey having multiple, perfectly timed simultaneous orgasms, and then collapsing into a perfectly satisfied heap. Fade out, the end.

Can you imagine anything more boring than reading something like that?.

But every imperfect story can be imperfect in its own special and interesting way, if it’s told well.

Where to find Jay Whett online

Sweet Orchids Resort by Jay Whett
The fabulous and very exclusive Sweet Orchids Resort is heaven on earth – for the lucky few who can afford it. It’s a tropical island paradise where the guests enjoy all the gourmet food they can eat, all the vintage wine and top-shelf booze they can drink, and all the smokin’ hot girls they can take any time, any place, and any way they feel like. In any combonation, and as often as they can. A rotating crew of new and gorgeous girls arrives every day for a one week stay. So there’s always a fresh and eager face to cum in or on, a new hot, tight and wet pussy to fill, a different willing and supple ass to plow – or to spank, if that’s what the guy happens to feel like at the moment. Resort wear is always worn by the friendly and helpful staff, it’s optional for the guests, and never worn by the naked and lovely companions. So in addition to their very generous pay, a fabulous all-over tan is a nice bonus for the girls. Swimming, sailing, scuba diving, tennis, and even beach volleyball are all just icing on an already very tasty cake. And touch football becomes a whole new game when the girls are all nude, and cocksucking is the prize no matter who wins. 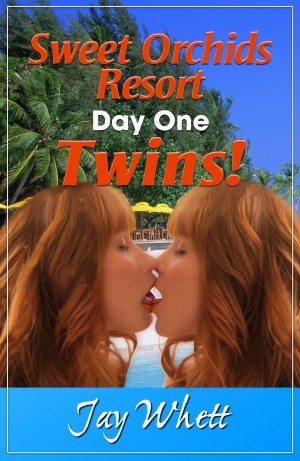 Sweet Orchids Resort One - Twins! by Jay Whett
Series: Sweet Orchids Resort. Price: $2.99 USD. Words: 12,630. Language: American English. Published: July 11, 2016. Categories: Fiction » Erotica » Menage/Multiple Partners, Fiction » Erotica » Literary Erotica
Gorgeous and naive twins Kelly and Kimberly need money for college, so they answer an ad in their school’s paper. Before they realize what they’re getting into, the girls are on a jet headed to a remote tropical island for seven very full days of brilliant tropical sunshine, seven twinkling starry nights, and steamy, non-stop sex with dozens of guys, quite a few girls, and even each other!

You have subscribed to alerts for Jay Whett.

You have been added to Jay Whett's favorite list.

You can also sign-up to receive email notifications whenever Jay Whett releases a new book.