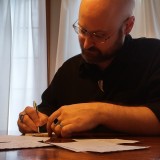 Jesse Teller fell in love with fantasy when he was five years old and played his first game of Dungeons & Dragons. The game gave him the ability to create stories and characters from a young age. He started consuming fantasy in every form and, by nine, was obsessed with the genre. As a young adult, he knew he wanted to make his life about fantasy. From exploring the relationship between man and woman, to studying the qualities of a leader or a tyrant, Jesse Teller uses his stories and settings to study real-world themes and issues.

He lives with his supportive wife, Rebekah, and his two inspiring children, Rayph and Tobin.

Where did you grow up, and how did this influence your writing?
I grew up in Milwaukee, WI, in a very poor neighborhood. We had a neighborhood gang and rival gangs in the area. I learned very quickly that there were things you did and wore, and things you didn't. I still remember the first time I learned a gang sign and how it made me feel. I felt as though I was a part of something. It made me feel safe, made me feel powerful. That mentality and culture influenced the work I do today. There are shades of violence in everything I write, a mythology to the places and people who live there that is very reminiscent of gang reputations and rumor. Back then, we knew all the members and heard the things they had done. We were proud of the gang that protected us. I look back on that now and see how terrible it was. Violence is not a thing to look up to, or in some cases worship, but the idea of a dark hero keeping the weak safe never left me.
When did you first start writing?
I started writing when I was in fifth grade, not sure of the age. I would do the math, but I'm no good at that. Writing was an idea I had never had before Mr. Olsen gave me my first assignment. Thought you needed permission to write a story before that—never imagined it was a thing I could just do. See, from the age of three, I was obsessed with stories. I used to pretend my stories were dreams so I had an excuse to tell them. I would say, "I had a dream last night. Wanna hear it?" then go on and on with a rolling story for half an hour. I think they knew dreams don't work like that, but they never said anything. Writing became a viable way of telling those stories.
Read more of this interview.

Where to find Jesse Teller online 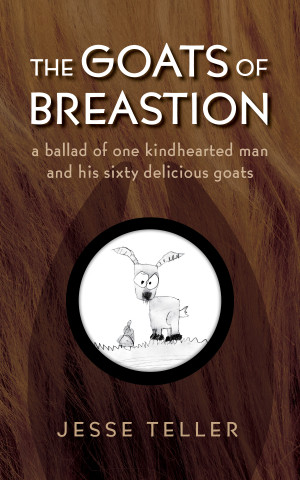 The Goats of Breastion by Jesse Teller
Price: $0.99 USD. Words: 11,890. Language: English. Published: April 14, 2019. Categories: Fiction » Fantasy » Short stories, Poetry » Epic
Breastion Flurryfist loved goats. As chief of his mighty tribe, he decreed no one harm a single hair on these precious creatures. When he died, his wife slaughtered and fed his goats to the tribe at his funeral feast. The men began a song that lives in infamy on the mountains of Neather. So grab a mug and toast to the fallen Flurryfist chief, with the ballad of the Goats of Breastion!

You have subscribed to alerts for Jesse Teller.

You have been added to Jesse Teller's favorite list.

You can also sign-up to receive email notifications whenever Jesse Teller releases a new book.