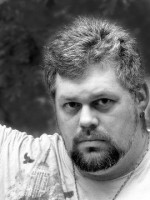 Writing since a young age, Timm has always been creative, whether writing and directing short films, to writing comics, short stories and novellas, or doing cosplay photography.

How do you approach cover design?
I take at most, the three most important aspects of the story and try to get them on the cover, usually the one main theme, and at most (if at all), two supporting ideas.
What are your five favorite books, and why?
On Writing by Stephen King is probably the most motivational book I've read. I listened to the unabridged audio book, read by King himself. The version I have includes his experience with the hit-and-run, and how he got back on the horse, so to speak.
Neverwhere by Neil Gaiman has some of the best prose I've ever read. I've tried emulating the way he turns phrases, with little success, but it is a benchmark I strive for.
Stranger in a Strange Land by Robert Heinlein is a book I read about every year or so. It influenced a non-Christian religion that is recognized by the US government, so the power of the writing, and just the thought processes of the characters, shows.
The Spenser series by Robert B. Parker shows the PI genre in its simplicity, both in his style of writing, and the character of the characters.
Read more of this interview.

Where to find Timm Gillick online 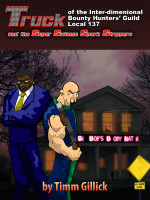 Truck of the Inter-dimensional Bounty Hunters' Guild Local 137 by Timm Gillick
Truck, along with his partner Big Daddy Fred, hunt down the worst of the worst kind of criminals. It doesn't matter the time, the galaxy, or even what dimension you run to, they will find you and bring you back. With a mix of comedy, sci-fi, action, and b-movie fun, Truck and Big Daddy Fred will keep you entertained 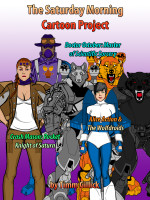 Saturday Morning Cartoon Project by Timm Gillick
Short stories written in the style of 1980s action cartoons we all used to watch on Saturday mornings while eating a couple bowls of sugary cereal! Silly, action-packed, and light-hearted, meant to be short, fun reads.

Alice Action and the Wolfdroids in Amazons & Archers
Price: $1.99 USD. 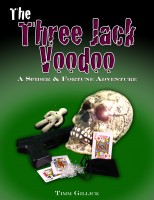 Spider & Fortune by Timm Gillick
A pair of sword-wielding PI's fight crime in and around Peoria, IL. 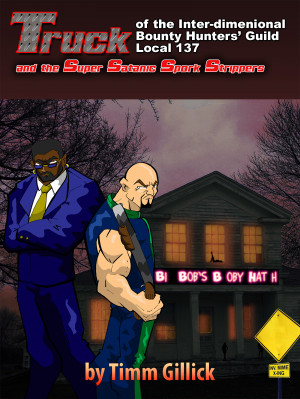 Truck of the Inter-dimensional Bounty Hunters' Guild Local 137 and the Super Satanic Spork Strippers by Timm Gillick
Series: Truck of the Inter-dimensional Bounty Hunters' Guild Local 137. Price: $2.99 USD. Words: 16,210. Language: English. Published: January 15, 2020. Categories: Fiction » Science fiction » Short stories, Fiction » Humor & comedy » General
Truck is sent to an old, abandoned strip club (is that possible?) to search for Frank, a little fella about yay tall, bright red hair, pasty white skin, wears a black suit and a red bow tie. What he finds is a group of kids whose friends have been captured by Satanic Strippers (reminding some of a cartoon group of kids with their dog). And what’s the deal with the sporks? 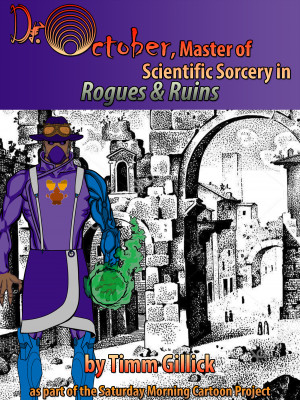 Doctor October: Master of Scientific Sorcery in Rogues & Ruins by Timm Gillick
Series: Saturday Morning Cartoon Project. Price: $0.99 USD. Words: 6,860. Language: English. Published: May 31, 2019. Categories: Fiction » Fantasy » Paranormal, Fiction » Adventure » Action
Working in his lab one Halloween night, Doctor Jericho October attempted to open a portal to another dimension using scientific methods on an ancient magic ritual. He created a massive portal between our world and that of the Astrokraken! Today he hunts down the Astrokraken's minions using magic and science, to prevent the Astrokraken from entering and then destroying our world. 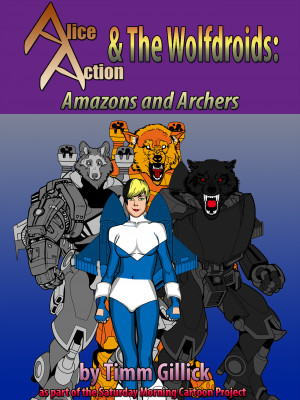 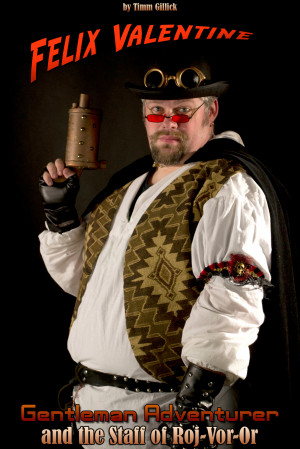 Felix Valentine, Gentleman Adventurer in The Staff of Raj-Vor-Or by Timm Gillick
Series: The Adventures of Felix Valentine, Gentleman Adventurer. Price: $1.99 USD. Words: 18,120. Language: English. Published: May 31, 2019. Categories: Fiction » Science fiction » Steampunk & retropunk, Fiction » Adventure » Action
Felix Valentine, gentleman adventurer is back in another steampunk adventure! Captain Brock Cosmic and Kid Phantom crash their Martian rocket on Earth, uncovering a map to the tomb of Poseidon.Can Felix, his paramour Angeline Hunter, brother Archer, and the Martians get there before the Daughter of the Horrible Octopus can? 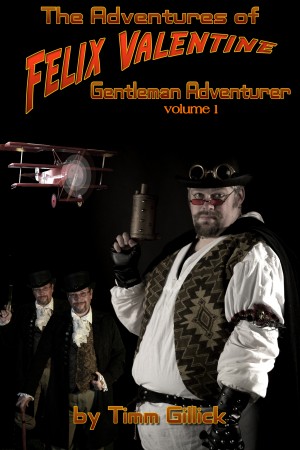 A collection of short steampunk stories featuring Felix Valentine, a robust, intelligent gentleman adventurer with a team of friends who assist him as he takes on the villains of the world in tales of high adventure! 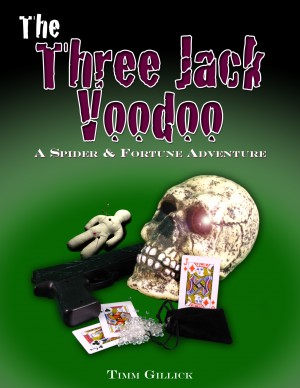 You have subscribed to alerts for Timm Gillick.

You have been added to Timm Gillick's favorite list.

You can also sign-up to receive email notifications whenever Timm Gillick releases a new book.