Where did you grow up, and how did this influence your writing?
I grew up in a medium-sized town in South Africa, during the last two decades of Apartheid. I moved to the capital city when I started studying.

My upbringing was so casually racist that it sticks in my throat to remember the person I used to be. With the exception of my mother and my first step-mother, I can't recall anyone ever showing empathy for black people.

There weren't many in our spacious, protected, lily-white suburbs. My father hired convicts as cheap labour on his building projects and became good friends with one man, Springbok. In later years his two best friends were a white former colleague and the black security guard that patrolled the company's basement parking. The three of them were inseparable for decades. I still believe my father died a racist. The other two passed away a few years before my father did.

The immense cruelty of the system still takes my breath away. My book was written, in part, to try understand how different people experience the realities of South African life. Most of the individual stories are based on real ones, as heard from various friends and acquaintances over the years.
What is the greatest joy of writing for you?
Some mornings I woke up puzzling over half-remembered dreams and just knew where to find statistics and data. Some mornings I just couldn't sleep any more and started writing at 3am, and the characters just did their own thing.

I've always wanted to be a writer. Until this idea coalesced, I could never settle on one topic long enough to write more than a couple of thousand words.

I had been fascinated by the concept of a universal basic income for months, during the time South Africans realized just how bad the State Capture situation was. I was contemplating writing some reader-submission articles. The problem would be to convince rich people that UBI was feasible in a completely different way than would be necessary to convince poor people.

So one day, 37 years after I learned to read in two languages, we had a visit from a very clever friend, an actuary. I suddenly realized that I wanted to write this book, as fiction, instead. While my husband and his mate debated what-if's, I wrote six thousand words in the space of two days.

The rest hangs on those original six thousand words. The rest was sometimes like projectile vomiting, and sometime worse than constipation during pregnancy. Every so often, something in the news led to comparative spreadsheets between conflicting annual reports, for weeks, till I was sure I was onto something. Then the brain vomiting would happen again. 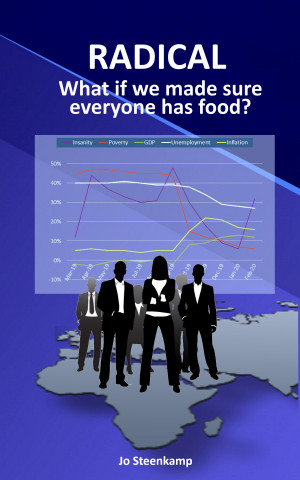 You have subscribed to alerts for Rojo Publishing.

You have been added to Rojo Publishing's favorite list.

You can also sign-up to receive email notifications whenever Rojo Publishing releases a new book.