Joanna was born and raised in the Chinese-Portuguese colony of Macau in South-East Asia. She came to the United States at nineteen to attend Barat College in Lake Forest, Illinois. She worked in IT in four different big-name companies before she was hired by Motorola in 1980. At Motorola, Joanna stayed for over thirty years until she retired in 2011. Her career at Motorola spanned Foreign Subsidiaries, International Joint Ventures, and Telecommunications Standards. During her Standards career, she served on the IEEE Standards Association Standards Board from 2005 to 2007, and as Chair of the IEEE Dynamic Spectrum Access Networks (SCC41) committee from 2007 to 2009.

Ironically, Joanna never wanted a high-tech career. When she won second place in a writing contest in High School, it sparked the hope that maybe someday she will be able to pursue a writing career. For the next four decades that dream would be put on hold as she fought to succeed in a highly technical career in order to provide for her family as a single mom. When she retired in 2011, she finally got the chance to return to her love of writing. Her first book, The Lesson of the Lost Horse, a memoir, was published on February 14, 2013.

Even though Joanna had a very successful technical career, her personal interest is anything but. Her passion is food, dancing and travel, which she shares zealously with her husband Clark. Their growing brood of six children and nine grandchildren keeps them busy when they are not traveling. They make their home in Chicago--the city that they love.

To view photos, excerpts etc. for The Lesson of the Lost Horse, please visit www.lessonlosthorse.com 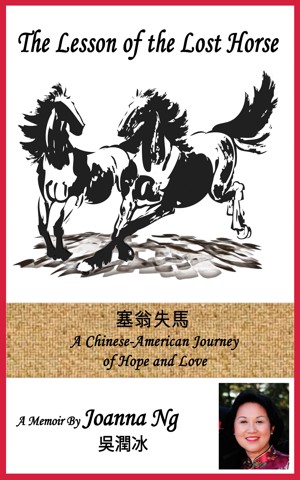 You have subscribed to alerts for Joanna Ng.

You have been added to Joanna Ng's favorite list.

You can also sign-up to receive email notifications whenever Joanna Ng releases a new book.