The picture is of my granddaughter. I'm very proud of her. She's sweet, bright and fearless. I am a psychiatrist. I'm very interested in the symbols that we use to facilitate thinking. Funforms is a new math symbol system that I believe does exactly that. Funforms [ff] is a place order binary tally mark system. I intend to publish some ebooks about ff.

Where did you grow up, and how did this influence your writing?
I grew up in South Florida. Even at that time there were a lot of Spanish-speaking people walking on the street. In 9th grade I took Spanish. I became fascinated that a second language was another way to think. I began approaching people on the street who were speaking Spanish to try my Spanish on them. Most of them were very patient with a pimply faced 14 or 15 year old kid. Then I discovered that learning Spanish taught me more about English and its structure than any course in grammar I had ever taken. In 10th grade I made my first new numerical system. It was based on base 7. I wanted to make sure that everything about math that was true in our decimal system was true in other systems. That turned out to be the case. Funforms is a binary, tally mark, place order system that will teach the learner many things about the decimal system that are not easily available from within the system itself.
When did you first start writing?
My career as a physician has led to the necessity to do a great deal of writing; reports and things like that. I did not begin writing Funforms until 1984. At that time I met a man who had similar interests. Harold Larson is the co-author of Funforms. Unfortunately, he died many years ago. We had a good time developing the new math learning system together.
Read more of this interview.

Where to find Joel Steinberg online 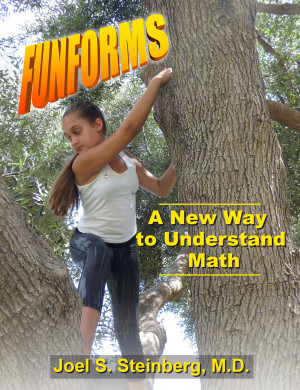 Funforms is a new math symbol system. Unlike Roman Numerals, it is iconic and ideographic. It makes the continuity between whole numbers and fractions easily understood. It is a binary tally mark place order system. It is a math second language, giving the learner the opportunity to review what s/he learned before s/he had fully developed critical thinking skills. Try it, you'll like it!

You have subscribed to alerts for Joel Steinberg.

You have been added to Joel Steinberg's favorite list.

You can also sign-up to receive email notifications whenever Joel Steinberg releases a new book.