I am from Leeds, Yorkshire which to clarify for those overseas is in UK, I worked for W.H.Smith's the booksellers and inventor of the ISBN when I first left School, and I am a Bibliophile through and through.

I went hitch hiking around Europe more years ago than I will admit to, which took me to the Artic circle in Finland (one of my favourite Countries, the people are sublime), as far South as Tehran in Iran (a dump of which the majority of the people are not warm towards outsiders), I didn't go into Spain (which at the time still had Franco in charge) or down to Portugal, otherwise with the exception of San Marino I have visited every Country in what was then Western Europe.

I was threatened at gunpoint in Hamburg, and an undercover agent for the Stasi tried to hire me as an agent for the Communist regime, I only worked this out later by a pure chance encounter with the person he was supposed to be ?

I have since owned various Newsagent shops (for our US cousins Mom & Pop store) worked in the Building trade, renovated houses, worked in warehousing and finally I am currently doing Security guard work.

Which is basically someone pays me, and I in the mean time write, whilst being praised as the best Guard most of the suits (what is the female of noun male executive is it Suitess ha ha) have encountered.

In the mean time I have written the 1st volume of my History of Medieval England, I did this because primarily it was just facts that I could keep track of, so when I continually got broken off to do my paid job, it was not my imagination and train of thought that were interrupted, just my gathering of facts.

I have already written a novel, which is an adveture thriller, but this has had over thirty rejections, however the feedback was all positive, "over written but better than most", when I read it now I know exactly what they mean, so a re-edit is needed the current 125k words down to around 80k to 90k words.

Edit Nov 28th
I have started writing my next project which is the Story of Alfred the Great, his Daughter Aethelflaed, and Grandson Aethelstan, who was the first King to unite England under one State. Alfred is well known, Athelstan not very well known. What I found whilst writing the 1st volume of my History was Aethelflaed, has been nearly airbrushed from history, but was probably England's greatest heroine, winning 3 battles (I put forward she won a 4th more important battle) and helping to unite a then splintered Country.

Anyway she seems to have slipped from History because she was a Woman, but also a bit of bad luck, in that she died before securing York and Northumbria as part of Wessex & Mercia, had she completed that project I firmly think she would be still well known. Athelstan united for a time what would become the permanent makeup of England, so these three Father Daughter and Garndson helped create the England of today.

So I am currently forming the story into a cracking read.

June 2013
The new book is to be called 'England's Foundation' and is nearing completion, however it then needs editing, by me, then re-editing by others, and so still lots of work but is getting there. I shall be updating my Website at some point, I have been distracted helping a friend who was seriously ill, which meant that weekends when I should be updating the website were taken up helping him, he is now recovering okay, so I will be getting to grips with the website by July?

Where to find John Ashtone online 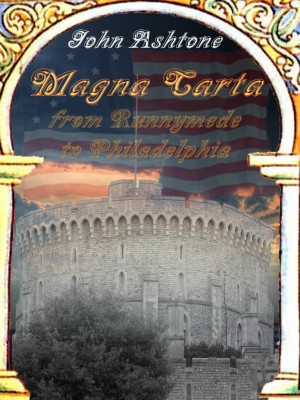 Magna Carta: Runnymede to Philadelphia by John Ashtone
Price: $2.99 USD. Words: 30,260. Language: English. Published: May 29, 2015. Categories: Nonfiction » History » European, Nonfiction » History » North America
The gripping tale, of how a failed peace treaty, between the English Barons and King John, became the cornerstone of the UK and US constitutions. How two paragraphs of words, intended to stop a corrupt and venal King from stealing from all ranks of his Kingdom, led to the foundation of modern Laws and freedoms. And how these Laws and freedoms became the basis of the Free World.

You have subscribed to alerts for John Ashtone.

You have been added to John Ashtone's favorite list.

You can also sign-up to receive email notifications whenever John Ashtone releases a new book.