John J. Fero is a contemporary writer of fantasy and horror. He was born October 1, 1981. With the sacred scale of the zodiac, he is a proud Libra. His love affair with writing began at a young age. In his own words, "As far back as I can remember, I always loved to create stories. As a child I would make up stories, some with heroes, others with monsters and ghouls, and my friends and I would act them out in plays for family and friends." Around the age of thirteen, fate led him to a certain vampire named Lestat. Infatuated with the works of Ann Rice, specifically "Interview with a Vampire," John began a lifelong fascination with the way words on a page could bring a character or a world to life. So, with his undying artistic temperament, he vies to create his own worlds of fantasy and horror. He is also a self-proclaimed "die hard" sports fan and follower of the vast majority of New York teams: the New York Knicks, Giants, and, of course, the Yankees. He currently resides in New York with his wife and two kids. 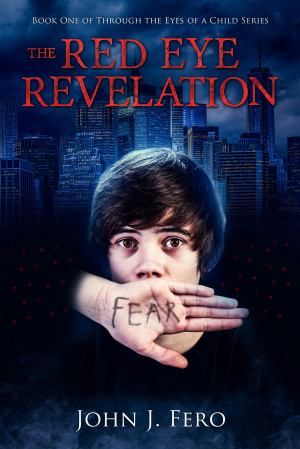 The Red Eye Revelation (Through the Eyes of a Child, Book 1) by John J. Fero
Price: $0.99 USD. Words: 11,160. Language: English. Published: May 1, 2018. Categories: Fiction » Horror » Undead, Fiction » Science fiction » Apocalyptic
In the course of one night, civilization has fallen and terror has risen as zombies have taken control. Twelve-year-old Drew, has awoken to a world overtaken by chaos and destruction. Now Drew, along with his mother and father, must find a way out of the inner city of New York that is overrun with the ever-growing undead. A heart-pounding horror story told through the eyes of a child.

You have subscribed to alerts for John J. Fero.

You have been added to John J. Fero's favorite list.

You can also sign-up to receive email notifications whenever John J. Fero releases a new book.