Jonathan Janz grew up between a dark forest and a graveyard, which explains everything. Brian Keene named his debut novel The Sorrows "the best horror novel of 2012." The Library Journal deemed his follow-up, House of Skin, "reminiscent of Shirley Jackson's The Haunting of Hill House and Peter Straub's Ghost Story."

2013 saw the publication of his novel of vampirism and demonic possession The Darkest Lullaby, as well as his serialized horror novel Savage Species. Of Savage Species Publishers Weekly said, "Fans of old-school splatterpunk horror--Janz cites Richard Laymon as an influence, and it shows--will find much to relish." Jonathan's Kindle Worlds novel Bloodshot: Kingdom of Shadows marked his first foray into the superhero/action genre.

Jack Ketchum called his vampire western Dust Devils a "Rousing-good weird western," and his sequel to The Sorrows (Castle of Sorrows) was selected one of 2014's top three novels by Pod of Horror. 2015 saw the release of The Nightmare Girl, which prompted Pod of Horror to call Jonathan "Horror's Next Big Thing." His newest release is Wolfjavascript:void(0) Land, which Publishers Weekly called "gruesome yet entertaining gorefest" with "an impressive and bloody climax." He has also written four novellas (Exorcist Road, The Clearing of Travis Coble, Old Order, and Witching Hour Theatre) and several short stories.

His primary interests are his wonderful wife and his three amazing children, and though he realizes that every author's wife and children are wonderful and amazing, in this case the cliché happens to be true. You can learn more about Jonathan at www.jonathanjanz.com. You can also find him on Facebook, via @jonathanjanz on Twitter, on Instagram (jonathanjanz) or on his Goodreads and Amazon author pages.

Where to find Jonathan Janz online 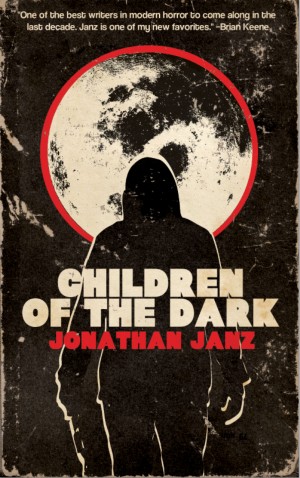 Children of the Dark by Jonathan Janz
Price: $2.99 USD. Words: 99,930. Language: English. Published: March 15, 2016 by Sinister Grin Press. Categories: Fiction » Thriller & suspense » Action & suspense, Fiction » Horror » General
Will Burgess is used to hard knocks. Will’s troubles, however, are just beginning. Because one of the nation’s most notorious criminals—the Moonlight Killer—has escaped from prison and is headed straight toward Will’s hometown.

You have subscribed to alerts for Jonathan Janz.

You have been added to Jonathan Janz's favorite list.

You can also sign-up to receive email notifications whenever Jonathan Janz releases a new book.