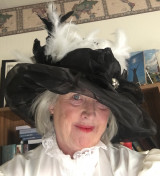 June Ahern has authored four books; two novels and two non-fictions, and two screenplays. Her non-fiction book, "How to Talk With Spirits: Seances, Mediums, Ghost Hunts" has been optioned to become a movie with Veronica Cartwright (Aliens, Witches of Eastwick) starring as June in the leading role.

Although mostly retired from private practice June continues to lecture and teach on-line workshops and classes, which can be reviewed at her website. She is also a frequent guest on radio/podcasts. And in 2022 joined the historical landmark and world famous Winchester Mystery House as a in-house medium and guest speaker for special events.

Since beginning her professional career in 1975 as a psychic reader and medium June has taught many people to manifest their visions into fulfillment. She has worked with law enforcement to help solve missing persons and murder and she tells about her unique experiences with spirit communication. Read more about her metaphysical coaching at sfcoaching.com. You will also see June 's paranormal investigation at reported haunted sites around San Francisco's Bay Area in historical videos with The Haunted Bay on Amazon Prime, AsianAmericanMovies and Youtube.

Her appearances on television, radio and YouTube, teaching at the Learning Annex, and along with her consumer guide, "The Timeless Counselor: The Best Guide to a Successful Psychic Reading", has earned her national and international notice. This book was a number one seller by an unknown author at the New York 1991 Whole Life Expo where she was a featured speaker.

June was born in Glasgow, Scotland before emigrating to San Francisco along with her family. They lived in a up district that is situation just about in the heart of the city called Eureka Valley, which became known world-known as the colorful Castro.She now lives on the California coast.

Where did you grow up, and how did this influence your writing?
Yes, where I was born and where I grew up greatly influenced my writing as well as my life overall. I was born in Glasgow, Scotland and at the age of six emigrated to San Francisco, California. We were but the very few Scottish families in the district of San Francisco I grew up in, which was (is) called Eureka Valley. The residents at that time were working class Irish, Italians and Scandinavians. Location wise it sits approximately in the heart of of San Francisco. Most will know the area as well-known areas known to “The Castro.” Like many immigrants, we kept to our Scottish language and cultures. I grew up listening to stories of “back home” and “the war” (that being the World War II.) The stories were funny (as are the Scots) and also sad, as is life. When I came of age during the 1960's my neighborhood, like all of San Francisco, changed rapidly. It wasn't long before I was hanging out on Castro Street with the hippies and the gays, something that shocked the many older residents. Later, I frequented Harvey Milk's photo shop as I was very into taking photographs. The rapid social and political changes of the '60's and '70's had a huge impact upon my role as a woman and with my religious teachings. All of this is reflected in my writings in both my paranormal non-fictions and novels. The flavor, history and happenings of my great city San Francisco and the connection to Scotland carried my imagination to create lively stories about strong, rebellious women.
When did you first start writing?
Let me say first, I never thought of myself as a writer, let alone an author. My real artistic talent is drawing, which I still I love to do. My first recognized writing won me an award and $25! A big deal in 1963. It was an essay I wrote in eighth grade about what it meant to become a United States citizen. It wasn't until 1984 did I write a few unpublished short stories and a stage play for a college class. In the late '80's a friend encouraged me to write a book about psychic readings. She said it would validate me more so professionally. So I did and she published the small paperback. To this day (under a new title) it continues to sell. Also about that time, an article was published that I wrote for a psychic newsletter about psychic hotlines. Not until this book came under a new title and an ebook was it included. Writing became a pleasure to share what I had been studying and learning with the metaphysics and paranormal. As I learned to navigate around the Internet I wrote articles for on-line sites and created a blog, again from the advise of a computer smart friend. My writing heart is still in stage and screenplays thus my first novel was born. I wrote The Skye in June first as a screenplay; a tribute to my sisters. If not for an author friend recommending I write the novel to the screenplay to create more attention, I don't believe I would have embarked on that goal. It was published in 2008 and followed in 2012 by my second novel, also written first as a screenplay upon the request of a Scottish actress. Since then, my latest book is again a non-fiction paranormal.
Read more of this interview.

Where to find June Ahern online 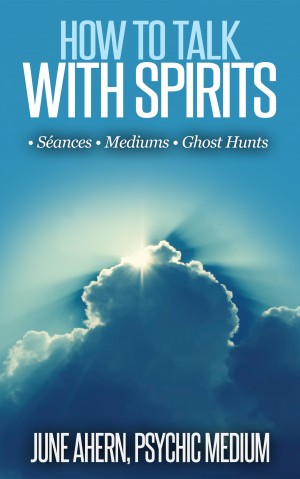 How dead are the "dead" if we can talk to them? While skeptics deny spirit communication can happen, the public is eager to know more about the subject. The book is an informative book explaining how to effectively explore the possibilities of communicating with the dead in safe and healing ways. June's ESP Quiz will reveal your psychic abilities. 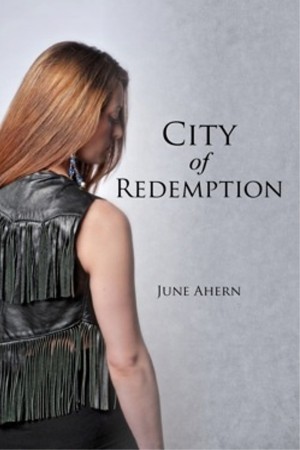 Flower Power explodes into fire power when a lonely young woman becomes embroiled in drugs, gunrunning and a plot to bring down the Black Panther during the Summer of Love. Liz Mackay grieving the loss of her murdered son and abandonment by her husband travels to San Francisco for a fresh start, joins a commune of oddly matched members and soon is entangled in the dark underbelly of the times. 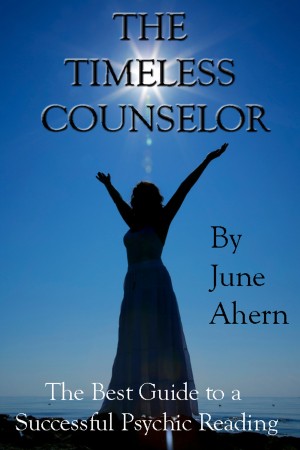 The Timeless Counselor: The Best Guide to a Successful Psychic Reading is a complete consumer's guide for receiving the greatest benefits from a psychic reading. You'll learn how such things as ask questions to gain detailed answers; use the information after successfully; choose a reader best suited for you; avoid scammers; learn about your psychic skills with June's ESP Quiz and so much more . 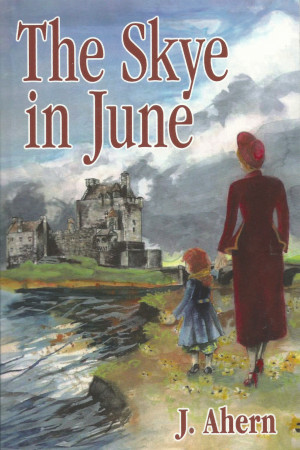 The MacDonalds emigrate from Scotland after a family tragedy but cannot escape the youngest child's strange insights threaten to expose the mother's dark secret nor the father's dominance over his four daughters, whose hilarious tactics divert his wrath The family is imploding as the sisters come of age during San Francisco's colorful 1960s. A story of how a family changes over years.

You have subscribed to alerts for June Ahern.

You have been added to June Ahern's favorite list.

You can also sign-up to receive email notifications whenever June Ahern releases a new book.