Humorist KEVIN FAGAN is best known as the creator of Drabble, a nationally syndicated cartoon strip debuting in March of 1979. At that time, Kevin was 22 and the youngest syndicated cartoonist on record. The Drabble family, features Ralph and June, the loveable parents of three not always adorable children - Norman, Patrick and Penny. Their pets, Wally the wiener dog, Bob the parrot and Oogie the cat, along with a few wacky friends and neighbors round out the Drabble household. Drabble fans--and there are millions of them--are animal lovers, sports fans, parents, grandparents, college students and kids. But mostly, Drabble fans are people who believe in the family and all that is good about being a family. Fagan has created an original cartoon six days a week for the last 33 years, each and every one hand drawn. He taps into what's best in family humor by turning ordinary daily life into relatable and very funny, shared common experiences in the great American tradition of Bill Cosby, Charles Schultz and Will Rogers.

Drabble fans number some 4,000,000 daily readers in over 200 newspapers nationally and various online forums globally. To put those numbers in perspective, Drabble daily readership is the equivalent of a hit primetime television viewership. Also, Kevin Fagan has 8 published Drabble books to his credit.

Kevin's latest book is a delightful story, "A Drabble Family Christmas Tale" Now Available in paperback or eBook on Amazon. See more about Kevin and the Drabbles at drabble.com

Where to find Kevin Fagan online 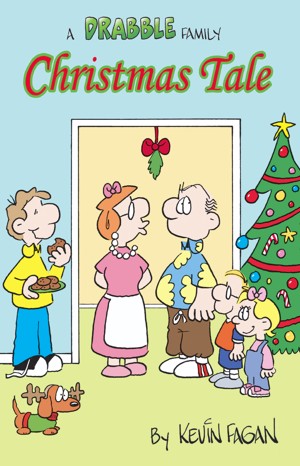 A Drabble Family Christmas Tale by Kevin Fagan
Price: $3.99 USD. Words: 21,640. Language: English. Published: November 5, 2012. Categories: Fiction » Holiday » Christmas, Fiction » Humor & comedy » General
Humorist Kevin Fagan is best known as the creator of DRABBLE, a nationally syndicated comic strip which appears in nearly 200 newspapers and online outlets in the USA and around the world. The Drabble family celebrates all that is good about being a family. Kevin Fagan now has one very funny Christmas story about the Drabble family to add to his credit.

You have subscribed to alerts for Kevin Fagan.

You have been added to Kevin Fagan's favorite list.

You can also sign-up to receive email notifications whenever Kevin Fagan releases a new book.