I was born and raised in Morristown, NJ. The years I spent there in a home on Lake Valley Road shaped my life and my writing, which began there, when I was 11. My childhood memoir, When I Was German, tells that story.

Now, at 49, I'm still writing. I'm divorced, have two teenaged kids, and was out of work for almost 2 years in the Great Recession. I've been writing about that, too. A novel, The Seventh Round, that I will publish soon, tells that story. And another is in the works. I'm most prolific, and adept, at telling my own life story, whether in memoir, or fiction.

As for the writers I most admire, well, Hemingway, of course. And Bukowski...I can't read any other poetry but his. Vonnegut, Cormac McCarthy, George Orwell, and Mark Twain.

Do you remember the first story you ever wrote?
I don't remember, but it had to be 3rd or 4th grade. I remember writing stories for class in the 5th and 6th grade and getting high marks for them. I also wrote 63 pages of a war novel in 6th grade! I never finished it, though. Wish I still had it but all my school work was thrown out.
What is your writing process?
This is a question formulated by someone who doesn't write, as far as I'm concerned. There is no process, you just sit down and write. All I can say on this is I tend to cycle...write for weeks and weeks then nothing for weeks (or months).
Read more of this interview.

Where to find Alan Wynzel online 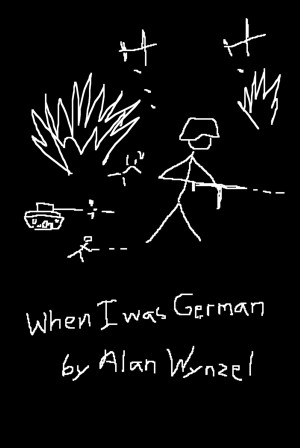 When I Was German is the childhood memoir of a boy raised in a home that reverberated with the echoes of World War II. Although born in NJ long after the last guns in Europe went silent, the unresolved grief of his German mother and the bitter conflict between her and his Jewish father made for a home that was a battlefield through which the boy struggled to survive and grow.

You have subscribed to alerts for Alan Wynzel.

You have been added to Alan Wynzel's favorite list.

You can also sign-up to receive email notifications whenever Alan Wynzel releases a new book.