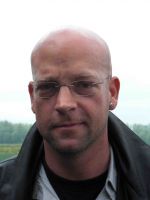 My name is Aernout Zevenbergen (1967) - I am a professional storycatcher and wanderer, with Africa as my arena.

As a storycatcher I do my best to capture what is out there as the ways in which people perceive their own reality, without thinking that any of those is something weird like &#39;the truth&#39;.

I use all the media at my disposal: text, internet, podcasting, photography and other visuals. I am a journalist, an author, a publisher and a designer. I act as speaker and give lectures. I use media to broadcast my own amazement at existence, in all of its aspects. My main theme is men: masculinity and what it means to be a man.

Through my work, I learn. It is my hope that you, as a client or as a member of the audience, learn just as much as I do through the work I publish.

Having my perceived securities erode by searching for the paradox in everything. Transcending contradictions of existence through living both, at the same time. Gliding up and down the rainbow of my own pre-conceived ideas and thoughts.

These are my passions. They challenge and rip, soothe and rock, tear and build.

Where to find Aernout Zevenbergen online

On Being A Man
Aernout Zevenbergen speaks about the need for new ideas, new visions, new approaches when tackling the two combined plagues of HIV/Aids and sexual & domestic violence in Africa. Men have - now more than ever - a chance to liberate themselves from the yoke of patriarchy, explains Zevenbergen, and become full human beings.

An interview with talk show host Patricia Amira
Patricia Amira, the queen of African talk shows, interviews Aernout Zevenbergen on his book "Spots of a leopard - on being a man". Zevenbergen is a journalist and professional "story catcher". Between 2001 and 2009 he roamed through Africa, trying to find answers to the question, "What does it mean to be a man, today, in Africa?"

You have subscribed to alerts for Aernout Zevenbergen.

You can also sign-up to receive email notifications whenever Aernout Zevenbergen releases a new book.