Author, actress and playwright Leanna Renee Hieber grew up in rural Ohio inventing ghost stories. She graduated with a BFA in Theatre and a focus in the Victorian Era from Miami University. She began her theatrical career with the Cincinnati Shakespeare Company and began adapting works of 19th Century literature for the stage. Her one-act plays such as Favorite Lady have been published, awarded and produced around the country. Her novella Dark Nest won the 2009 Prism Award for excellence in the genre of Futuristic, Fantasy, or Paranormal Romance.

Her debut novel, The Strangely Beautiful Tale of Miss Percy Parker, first in her Strangely Beautiful series, landed on Barnes & Noble's bestseller lists, was named a favourite of 2009 by 14 book blogs, won two 2010 Prism Awards (Best Fantasy, Best First Book), the 2010 Orange County Book Buyer's Best Award (Young Adult category) and is currently in development as a musical theatre production with Broadway talent on board. The Perilous Prophecy of Guard and Goddess, the prequel in the series, won the 2012 Prism Award (Best Fantasy).

DARKER STILL: A Novel of Magic Most Foul, first in Leanna's Gothic Historical Paranormal saga for teens (Sourcebooks), hit the Kid's/YA INDIE NEXT LIST as a recommended title by the American Booksellers Association. The book has been praised by Seventeen Magazine, Shelf Awareness, The Chicago Tribune, Pixie Magazine and more and was selected for a SCHOLASTIC edition as a "highly recommended" title.

Leanna's short fiction has been featured in anthologies Candle In the Attic Window and the upcoming Willful Impropriety: Tales of Society and Scandal, "Too Fond"; a short story on Tor.com and Queen Victoria's Book of Spells: Tales of Gaslight Fantasy (March 2013, Tor). Her new Gaslamp Fantasy series with Tor/Macmillan, THE ETERNA FILES, launches 2014. Her books have been translated into many languages and have been selected for multiple book club editions.

Represented by Nicholas Roman Lewis, Leanna is a member of the Science Fiction and Fantasy Writers of America, Romance Writers of America and International Thriller Writers. She is proud to be a co-founder of the original Lady Jane's Salon Reading Series in New York. Leanna was named the 2010 RWA NYC Chapter Author of the Year.

A member of Actors Equity Association and SAG-AFTRA, Leanna works often in film and television on shows like Boardwalk Empire and is thrilled to be playing a principle role as Deputy Kellion in the forthcoming web-series Auror's Tale. When not writing or on set, she's busy telling ghost stories, frequenting Goth clubs, corset shopping, channeling Narcissa Malfoy, wandering graveyards and generally adventuring about her adopted hometown of New York City, where she resides with her real-life hero and their beloved rescued lab rabbit. 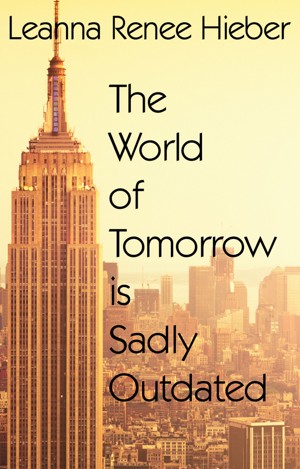 The World of Tomorrow is Sadly Outdated by Leanna Renee Hieber
Price: $2.99 USD. Words: 19,520. Language: English. Published: February 9, 2013. Categories: Fiction » Fantasy » Historical
New York City: The Year is 1888. In 1888 a group of pseudo-scientists discover the "temporal current" & begin to view the future awaiting the Empire City, where all life has crumbled, leaving New York City a ghost town with a populous scrabbling to survive underground. In the past, Victorian heroines & heroes must preserve their world to save their future.

You have subscribed to alerts for Leanna Renee Hieber.

You have been added to Leanna Renee Hieber's favorite list.

You can also sign-up to receive email notifications whenever Leanna Renee Hieber releases a new book.