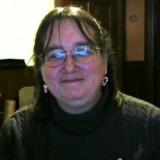 Linda is a student at Franklin Pierce University, majoring in Business, Accounting, and minor in Social Services, where she will then seek an MBA in Accounting. She began her writing career in 2010 with a Contemporary Young Adult series called Wings From Ashes. A year later she began her Fantasy series, Orgarlan Saga. In 2012, a close colleague introduced her to Romance Writers of America, building an interest in romance stories which brought about the third book in her contemporary series, Along Came Neil.
In what little spare time she has these days, she writes on the weekends and when school is out of session, during the holidays. The rest of her time is spent working her full-time day job and playing with her writing mascot pup, Keelaa. Visit Linda at lindajnelson.com

What motivated you to become an indie author?
When I first began writing in 2008 I wasn't really sure what I wanted from a writing career. At the time it was my way of dealing with the fustrations I felt when my then teen children began having social issues as in drug addiction and such. Writing was my therapy, that's all it was.
The first book I wrote, Friends of Choice, was originally written as a short story. I had an editor read this and she told me I should finish the story. That is how it became a novel that I self-published. I never really intended on this book being read by many.
Do you remember the first story you ever read, and the impact it had on you?
Oh yes, that would be the Black Stallion series. Back then, when I was in seventh grade, I wasn't much of a reader. I guess it was because I hadn't truly found books that grabbed me right into the story as this one did. I had to go out and read every book in that series.
After that, I looked for book series. Then I was introduced to the Lord of the Ring series which sparked my true love for fantasy literature. That series made me hungry for more and more fantasy, a good way to find escapism.
Read more of this interview.

Where to find Linda Nelson online

You have subscribed to alerts for Linda Nelson.

You have been added to Linda Nelson's favorite list.

You can also sign-up to receive email notifications whenever Linda Nelson releases a new book.