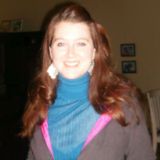 Angela D’Ambrosio was born in Boise, Idaho in 1977, the second of four children and only girl. She was raised in Cambridge, Idaho the gateway to Hells Canyon. Her father, a teacher, and river guide and her mother a homemaker. Her short stories have been featured in Go Read Your Lunch and The Idaho Magazine. She currently lives in Boise with her husband and three kids.

Where to find Angela D'Ambrosio online

You have subscribed to alerts for Angela D'Ambrosio.

You have been added to Angela D'Ambrosio's favorite list.

You can also sign-up to receive email notifications whenever Angela D'Ambrosio releases a new book.