Lorn Macintyre was born in Taynuilt, Argyll, in 1942, and lived in Connel at The Square, Dunstaffnage House until the family moved to Tobermory, Mull, when he was a teenager. He studied at Stirling University and did a doctorate on Sir Walter Scott at Glasgow University. Having worked as a freelance writer and journalist, he spent years as a senior researcher and scriptwriter in BBC Gaelic and English television.
Lorn has drawn extensively on his Highland background in his writings. His Dunstaffnage House years formed the inspiration for a series of novels, Chronicles of Invernevis, about the fortunes of a landed family throughout the 20th century. He has published two collections of short stories, Tobermory Days and Tobermory Tales, about his formative years on Mull, where his father Angus, a poet and raconteur, was the charismatic Gaelic speaking bank manager. His 2012 collection of short stories, Miss Esther Scott’s Fancy, celebrates his love, with his wife Mary, of dancing. His novel, The Leaper, published in 2017, is about a Gaelic speaking fisherman who is an outsider in an island community which has lost, or abandoned, its native language.
His poetry collection, A Snowball in Summer, celebrates his Highland ancestry, with a long poem recalling his mother’s suffering from Dementia.

Where to find Lorn Macintyre online 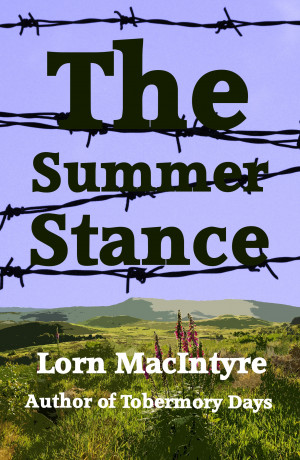 The Summer Stance by Lorn Macintyre
Price: $2.49 USD. Words: 66,180. Language: English. Published: September 4, 2019 by ThunderPoint Publishing Ltd.. Categories: Fiction » Literature » Literary, Fiction » Cultural & ethnic themes » Cultural interest, general
The Summer Stance is more than a story of one man clinging to his traditions, it is a eulogy to centuries of Scottish cultural history in danger of being forgotten.

You have subscribed to alerts for Lorn Macintyre.

You have been added to Lorn Macintyre's favorite list.

You can also sign-up to receive email notifications whenever Lorn Macintyre releases a new book.