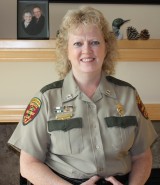 Retired from a 30 year career in Natural Resources law enforcement as a Conservation Officer for the State of Minnesota. Married 21 years to husband, Michael, together we have two daughters and three grand children.

Where did you grow up, and how did this influence your writing?
I grew up in Little Canada, Minnesota which influenced my writing by being a place of great freedom for kids allowing for a tremendous amount of time spent in the great outdoors. This love of the outdoors helped influence my career choice in Natural Resources Law Enforcement which is what my book is based on.
What's the story behind your latest book?
My memoir covers a profession few have lived through and a perspective that is extremely rare and unique. Readers will get a glimpse into the world of natural resource law enforcement through the eyes of a woman who has a story unlike any other they may have read. Those interested in the outdoors, law enforcement, natural resources, or women struggling to overcome obstacles will find this an enjoyable read.

It was 1980 when I became Minnesota’s first female Conservation Officer ever hired. Over the next thirty years I struggled with chauvinistic training officers, supervisors and promotional battles that never got easier as I learned the lesson over and over again that I was “Never Really One of the Guys.” I worked in the field arresting violators while checking hunters in the woods, fishing licenses, boaters, and snowmobilers on the lakes and rivers of Minnesota while I handled issues with Minnesota’s diverse wildlife.

I married three times before finding a man capable of handling a wife in law enforcement officer with odd hours, unusual duties, and the unusual notoriety that comes with this profession. My third husband, also an officer, went on to become the Chief in charge of their entire Division. This brought with it new challenges as I fought to maintain her own identity as people started referring to us merely as a couple and I found myself losing my personal power. After 24 years on the job, I became a Regional Captain in charge of just over one quarter of the state’s officers and two-thirds of the state’s population.

The end of my career brought on the fight of my life when I was fired amongst false charges of doing unauthorized work on a conference and the enormous eighteen month battle that ensued to gain my job back, win a law suit against the state, and earn back the integrity and respect they tried to steal.

A unique story about an unusual profession told from a very rare perspective. I hope you enjoy my book!
Read more of this interview. 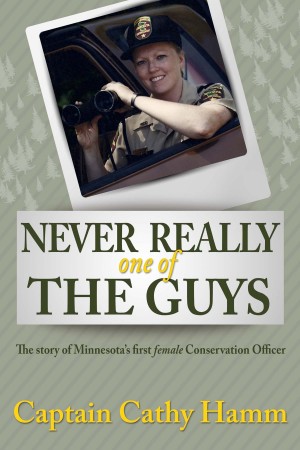 Never Really One of the Guys, the story of Minnesota's first female Conservation Officer by Cathy Hamm
Price: $6.99 USD. Words: 87,350. Language: English. Published: September 15, 2015. Categories: Nonfiction » Biography » Personal memoir, Nonfiction » Biography » Law enforcement
Memoir recalling a profession few have lived from a perspective that is extremely rare and unique. Readers will get a glimpse into the world of natural resource law enforcement through the eyes of a woman who has a story unlike any other they may have read. Those interested in the outdoors, law enforcement, natural resources, or struggling to overcome obstacles will find this an enjoyable read.

You have subscribed to alerts for Cathy Hamm.

You have been added to Cathy Hamm's favorite list.

You can also sign-up to receive email notifications whenever Cathy Hamm releases a new book.