Been a Star Wars fan all my life. Saw A New Hope in 1977 when I was seven. The rest is history. I used to write original work but tried my first stab at fan fiction after I saw Revenge of the Sith. I thought of how would a journal written by Palpatine look like? Thus, Palpatine's Journal was born and I haven't stopped writing fan-fic since.

I bought the DVDs of Firefly and fell in love with the show and characters in a heartbeat. Went to see Serenity five times in the theater and later got the Big Damn Movie on DVD itself. Shiny! As I got myself familiar with The 'Verse, I saw fit to try my hand at writing in it.

Like so many millions before me, I went to see The Dark Knight five times last year, once on IMAX, which was just mind-blowing. I have seen many movies and can appreciate great acting, but Heath Ledger's Joker was just awe inspiring. I had never seen an actor simply disappear into a role as well as he did. No one will ever even think of playing the Joker again. He set the bar that high! I started reading fan fics with the Joker, and so many go way over the top and use the same lines or techniques. I've come up with my own Joker, based on Heath's role, and have gotten the best compliments. Someone told me that they could hear Heath say my words as the Joker. What an honor. I dedicate my Dark Knight fan fics to the memory of Heath Ledger. He's up there with the best: BrandoOlivierLemon...and now Ledger.

Recently read and watched Coraline and was blown away by both. I thought of a story based on the book (the movie adds another character for the translation because in the book there's alot of inner thoughts from Coraline and that would be hard to express on film). I wondered what would happen to Coraline when she became an adult and I had to put it into words. 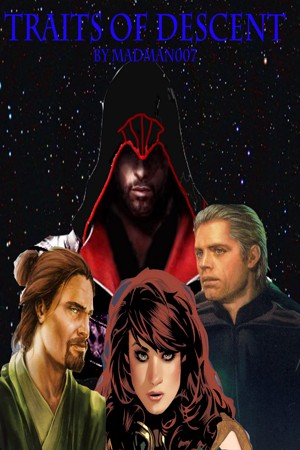 Star Wars: Traits Of Descent by Madman007
Price: Free! Words: 76,290. Language: English. Published: November 25, 2012 by Star Wars Fanbase Publications. Categories: Fiction » Science fiction » Space opera
A vigilante is killing current and former members of Black Sun. Some are saying he should continue. The Jedi have another sense of justice. Luke Skywalker investigates with the help of Mara Jade and Corran Horn. What they find is unexpected.

You have subscribed to alerts for Madman007.

You can also sign-up to receive email notifications whenever Madman007 releases a new book.