Some might say Maryem Muradi’s life has been as dramatic as the characters in her fiction. At three years old she escaped the Soviet Afghan War to emigrate to America, where the young Muslim would grow up to fall in love with the land of the free. But liberty only lasted so long. Muradi was in her first year of law school when two planes crashed into the World Trade Center, and overnight something as simple as a hijab became a radical political statement. Now a law school dropout struggling with debt, Muradi realized her American dream was spiraling into a nightmare and turned to the one pleasure that had always sustained her: books. Between the pages of a thousand novels she found courage, truth and even freedom; a word that had grown tarnished upon the lips of politicians.
By the time Donald Trump announced he was running for president, Muradi had broken through countless hurdles to emerge a successful attorney with a private practice. America had given her everything she had—and almost killed her in the process, so who better to write about the red, white and blue than a female, Muslim-American lawyer? Chump Country is a satirical take on the most outrageous figure in modern history suddenly finding himself the leader of the free world. But will Donald’s neon orange charm win over his detractors, or is chaos about to break out on Hair Force One?

Where to find Maryem Muradi online 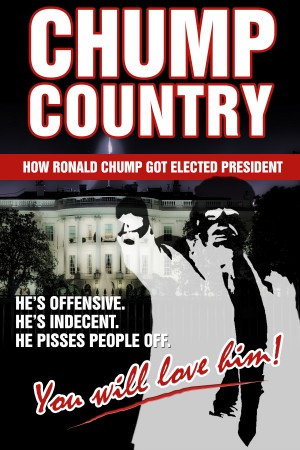 Chump Country : How Ronald Chump Got Elected President by Maryem Muradi
Price: $9.99 USD. Words: 51,750. Language: English. Published: August 17, 2016. Categories: Fiction » Thriller & suspense » Spies & espionage
While America and the rest of the world are talking about Ronald Chump and his presidential candidacy, author Maryem Muradi takes a humorous approach to explaining the situation. Although people are mostly divided into Chump Country supporters and Chump Country haters at this point, the author decides to present the case from the controversial candidate’s perspective.

You have subscribed to alerts for Maryem Muradi.

You have been added to Maryem Muradi's favorite list.

You can also sign-up to receive email notifications whenever Maryem Muradi releases a new book.