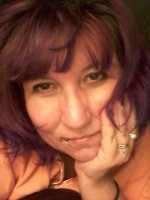 Melody Daggerhart is a writer, editor, data consultant, and artist currently living in Washington state. She has been writing and illustrating novels ever since she was old enough to hold crayons and talk to stuffed animals. After pursuing an education in English literature and working in a library and as a freelance consultant, she figures she is ready to share her fanciful tales with more than her statuary, guinea pigs, cats, best friends, and her own captive children.

Her favorite genre to read and write is dark fantasy, but sprinklings of comedy, horror, adventure, steampunk, romance, and contemporary elements seem to have fallen into her Elf Gate Series, as well. (Hair color is subject to change with writing projects and moods.)

Where to find Melody Daggerhart online

Elf Gate by Melody Daggerhart
This is a portal tale that stretches across several volumes like a story arc. Aija is mistakenly abducted into the land of the fae, where humans are outlawed and to be executed on sight. But she can't find her way home because the gate she came through collapsed. With the help of Trizryn, the enigmatic elf who mistook her, Aija discovers fae have modernized like humans, only differently; that they are on the brink of civil war; and that she must learn to defend herself in a world full of magic she doesn't understand. In trying to find a gate home before dragons destroy them all, they must unravel secrets not even Trizryn is aware of about himself and the fae court. This dark fantasy series combines elements of horror, comedy, romance, and adventure, in a modified steampunk setting. Teen rated for language and violence. 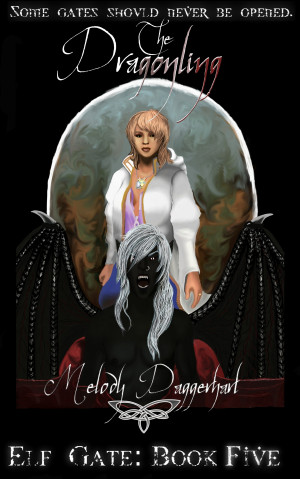 The Dragonling by Melody Daggerhart
Series: Elf Gate, Book 5. Price: $2.99 USD. Words: 246,570. Language: English. Published: October 27, 2017. Categories: Fiction » Fantasy » Dark, Fiction » Fantasy » Epic
Brinnan is besieged. The light elf king has disappeared. The Shadow Elf Conspiracy has declared war using gate dragons to burn the elven capital to the ground. And the only draconian ally of the fae rebels is in danger. Trizryn and Aija have one lead left in their search for a connection back to the human world, but their attempt to shelter Frostfang and her egg goes horribly awry. 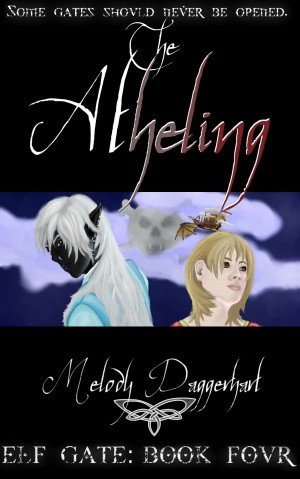 The Atheling by Melody Daggerhart
Series: Elf Gate, Book 4. Price: $2.99 USD. Words: 170,420. Language: English. Published: August 13, 2015. Categories: Fiction » Fantasy » Dark
A crashed airship could be the key to rescuing fae refugees trapped in Absin'navad; but time is running out for Trizryn to warn the kingdom about the impending dragon invasions, and Aija realizes the only way she can truly control a gate on her own is through magic. Could chasing ghosts help them find solutions, or would it only tempt history to repeat itself? 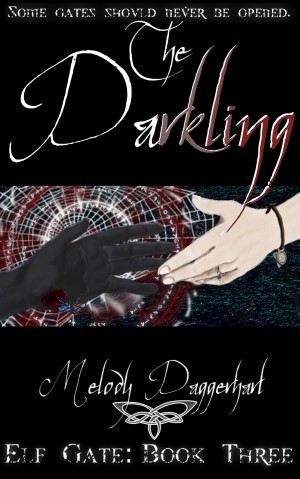 The Darkling by Melody Daggerhart
Series: Elf Gate, Book 3. Price: $2.99 USD. Words: 166,120. Language: English. Published: August 16, 2014. Categories: Fiction » Fantasy » General, Fiction » Adventure » General
Hoping for answers on how to fix the ancient elf gates, Aija and her dark elf ally, Trizryn, must deliver stolen Derra Eirlyn documents to the Deep Warrens for translation. But their investigation on the mysterious necromancer who took control of Absin'navad leads to a gruesome discovery concerning humans in the fae realm and a shocking truth about Trizryn's origins. 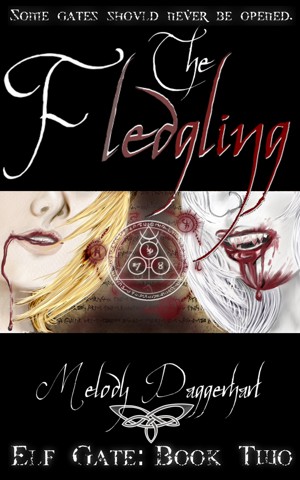 The Fledgling by Melody Daggerhart
Series: Elf Gate, Book 2. Price: $2.99 USD. Words: 151,320. Language: English. Published: June 25, 2013. Categories: Fiction » Fantasy » General, Fiction » Fantasy » Contemporary
Trapped in the land of the fae, Aija and her dark elf ally, Trizryn, are hunted by his Derra Eirlyn summoner, Kassí. Aija needs an elf gate to go home, and Trizryn needs to steal his summoning scroll to avoid being tracked. But when Kassí does her own investigation on the crumbling gates, they all soon discover a more immediate and deadly threat in their midst. 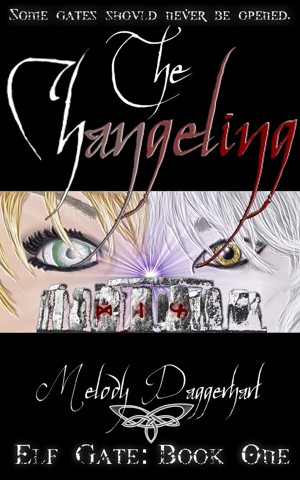 When Aija tries to help an injured elf in the woods near her home, she finds herself suddenly, and mistakenly, abducted into the realms of the fae. But the gate between their worlds has been destroyed by a dragon, and humans are executed on sight in this kingdom.

You have subscribed to alerts for Melody Daggerhart.

You have been added to Melody Daggerhart's favorite list.

You can also sign-up to receive email notifications whenever Melody Daggerhart releases a new book.