Orlando Fioravanti was born in the early 70's and at a young age he was brought up in and roamed the mean streets of Philadelphia. At age 16 Orlando was introduced into a life of crime by being given the opportunity to become a large scale cocaine dealer. A few years later he was living the life as a shot caller whereas Orlando assembled his own crew to carry out most of the criminal endeavors and to insulate him from the prosecution of the Feds. But after over a decade of living the good life of money, women and power, without a conviction Orlando slipped up and was convicted of attempted murder and sentenced to 15 years in prison.
While in prison Orlando focused his time on acquiring knowledge through the reading of books through a loaned book program with the state free library system wherein through this system Orlando studied subjects such as business, accounting, computers, CAD, computer tech in newer model cars, overall human anatomy, health and nutrition in regards to health and bodybuilding. He received his certification as a personal trainer and fancies himself a self acclaimed nutritionist. Along with that Orlando spent 2 years in study of Pennsylvania law to become a blackstone certified paralegal, whereafter representing many defendants in their appeals of their criminal convictions whereas winning a good percentage of his cases Orlando acquired the honored reputation as a "jailhouse lawyer".
It was from researching, writing, and then typing 50 page legal briefs to some of the most powerful Judges in Pennsylvania, that Orlando found a natural bridge to becoming a writer now that his 15 year sentence is behind him and he is ready to take his 15 years of study and begin writing.
You see, during his incarceration Orlando experienced a religious awakening and understanding as he has studied deeply over a decade the subject of Christianity and its history, not to mention leaning on his Lord and Savior Jesus Christ for guidance and grace. During his time in the Christian community within the prison system Orlando championed the cause of religious freedoms behind bars whereas Orlando used his education as a paralegal to produce civil lawsuits against the state prison system for not allowing the inmates to freely practice true first century Christianity. Today, due to Orlando's tirelessly litigating the various subjects all Christian inmates in the Pennsylvania D.O.C. may freely practice their religion without restriction.
Today Orlando lives quietly in the suburbs just outside Philadelphia, he has put his past criminal life behind him and has focused his attention to his up and coming books and the many messages he will produce through his books for all who search for truth and understanding.

Where to find Orlando Fioravanti online 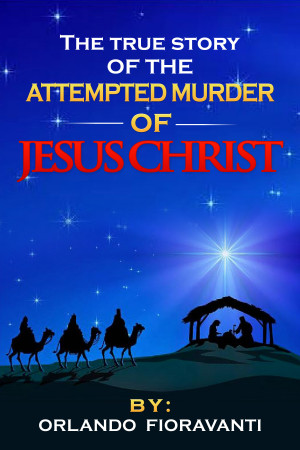 The True Story Of The Attempted Murder Of Jesus Christ by Orlando Fioravanti
Price: $7.99 USD. Words: 22,750. Language: English. Published: August 7, 2020. Categories: Nonfiction » Religion & Spirituality » Christian Life / Inspirational, Nonfiction » Religion & Spirituality » Holidays / Christmas & Advent
Do you want a better life? Do you want a better relationship with God? Haven't so many of us lost so much from covid-19 that we all want these things in our lives? Learn this unknown and untold 2000 year old truth from the Bible concerning the first Christmas and you just might change your life for the better forever. Learn this truth and you will be able to have a better relationship with God.

You have subscribed to alerts for Orlando Fioravanti.

You have been added to Orlando Fioravanti's favorite list.

You can also sign-up to receive email notifications whenever Orlando Fioravanti releases a new book.