MIKE EDISON is the former editor and publisher of High Times magazine, and was the editor-in-chief of the irresponsibly outrageous Screw. He is the author of the legendary memoir I Have Fun Everywhere I Go: Savage Tales of Pot, Porn, Punk Rock, Pro Wrestling, Talking Apes, Evil Bosses, Dirty Blues, American Heroes, and the Most Notorious Magazines in the World and Dirty! Dirty! Dirty! – Of Playboys, Pigs, and Penthouse Paupers, an American Tale of Sex and Wonder, as well as 28 “adult” novels. Edison has worked as a foreign correspondent for Hustler, and was a high-paid gun-for hire of the legendary Penthouse letters. In addition he is an internationally known musician, a ferociously dedicated storyteller and spoken word artist, and has contributed to numerous magazines and websites including Huffington Post, The Daily Beast, Spin, and the New York Press, for whom he covered classical music and professional wrestling. He speaks frequently on free speech and the American counterculture, and is “proof positive that one can be both edgy and erudite, lowbrow and literate, and take joy in the unbridled pleasures of the id without sacrificing the higher mind.” (PopMatters.com) Edison lives and works in New York City.

"One of the raunchiest stars of modern gonzo journalism." —Flavorpill“

“Edison glides along the edges of society with an intense dose of wit and a startling eye for the insane.”— Augusta Metro Spirit 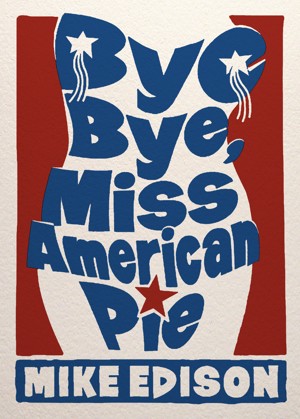 Bye Bye, Miss American Pie by Mike Edison
Price: $2.99 USD. Words: 12,700. Language: English. Published: September 7, 2012 and represented by Dystel and Goderich Literary Management. Categories: Fiction » Humor & comedy » Satire, Fiction » Anthologies » Short stories - single author
In this hilarious novella, an attractive female senator running for president gets caught with her illegal — but totally hot! — pool boy, she is forced to go on television to apologize to the nation. But she has other ideas, and when she tells America, “I got mine, now get yours! You know you want it!” she inadvertently kindles a new sexual revolution and launches the wildest campaign in history.

You have subscribed to alerts for Mike Edison.

You have been added to Mike Edison's favorite list.

You can also sign-up to receive email notifications whenever Mike Edison releases a new book.