Mil Brač is a Romanian writer (born in 1979) and a professional Army officer in real life, with a huge passion for both scifi and history. Also for everything military (hence his day job) – and that shows in his stories and novels, almost always having two things in common: the military tag and... Russians.
He was first published in 2015 with a short fantasy story and, since then, with 3 books (a collection of multigenre dark SFFH short-stories, ”Hoțul de Moarte/The Death Thief”, a steampunk novella, ”Luizienii/The Louisians”, a dark fantasy novel "Flamura Neagră/Black Flag"), in 4 anthologies (2 scifi and a fantasy one, including the Romanian ”Best SF&F of 2017”) and with 25 stories (mostly scifi, but also horror and fantasy) in all the Romanian magazines and e-zines that publish SFFH (”GazetaSF”, ”Fantastica”, ”Nautilus”, ”Helion”, ”Știință și Tehnică”, “Revista de Suspans”, “Argos”). So far, in English he was published in March 2018 by the American webzine „Aphelion” (Long Fiction) with a scifi story.

Where did you grow up, and how did this influence your writing?
I grew up in Communist 80s Romania, a Stalinist dictatorship considered, even in those times, the harshest in the entire Warsaw Pact block. That totally influenced both me as a person (I hate Communism bitterly, but am fascinated with Russian history) and as a writer: most of my works concern Russian characters in various alternative Soviet pasts and futures. Ambivalent characters in tough, ambivalent situations, always having to struggle hard to survive. Since during my childhood everything including literature, was state propaganda worshiping the Great Ruler, I became fascinated with the only two escapist gates: scifi and Russian books from the fifties about explorers, adventurers and teenager pioneers. Hence my chosen themes (sci or fantasy with Soviets); the fact I am, in real life, a professional Army officer, adds the third, military - almost all my stories and novels are war stories in one way or another.
When did you first start writing?
I first started writing in 2015 - a very short text published in GazetaSF, about a WW2 scout dying in a graveyard, his sadness in tandem with that of the local cemetery devil, both failing to understand the horror of WW2's new ways of evil. I received praises from the readers and critics, so I decided I should try longer texts, too. So far, 26 stories (all published in magazines, some also in anthologies or short-stories collections), a novella and a novel. With more novels to come in the future.
Read more of this interview.

Where to find Mil Brač online 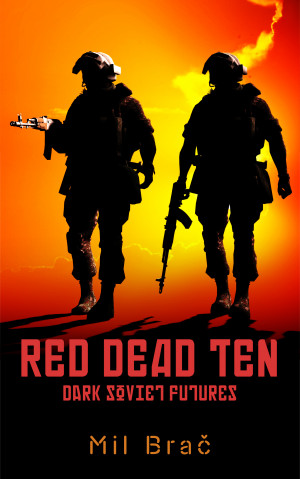 You have subscribed to alerts for Mil Brač.

You have been added to Mil Brač's favorite list.

You can also sign-up to receive email notifications whenever Mil Brač releases a new book.