Born and raised in New Jersey, Tom Brown attended college at Cal, UC Berkeley. After graduate school, he led a research project resulting in publication of four books and presented research findings to the California State Legislature. He worked with friends in real estate and financial planning. Then he took a risk. He didn’t know if it would be a success or a flop, but as he pondered the issue, he decided that defeat is not the worst failure. Having a dream and not having the courage to try – that’s the worst failure. So he wrote his novels and took temporary “day jobs” as a waiter, accountant, and substitute teacher. Along the way, he discovered that the journey itself is an enchanting reward.

An ex-marine, Tom likes to run, play softball, ski, and dive. He also enjoys cooking and wine. He has two ex-wives who don’t think much of him, a dog that loves him and a cat that ignores him. He’s a former Boy Scout leader, Rotarian of the Year (Terra Linda, CA), and the best thing he ever did in his life was give a kidney to his sister Joan. He never had a kid, so he followed the kid within himself, leading to quests for adventure. He skied double black diamonds in Lake Tahoe, hiked down the Grand Canyon, white water rafted rivers, swam with dolphins in the Florida Keys, kayaked with wild orcas (could almost touch them) in British Columbia and kayaked the Napali Coast.

Researching dolphins and the marine environment, he read every book he found, interviewed marine biologists, government officials, administrators at marine parks and research centers. He tried to think like a dolphin and how they might feel about the way people run the world. As he created his dolphin characters, they tried to strike a balance in the story with fun loving dolphinalities, so they don’t take things too seriously. Every day must have its joy. He wrote “The Dolphins’ View” trilogy, from which part of “The Great Dolphin Escape” is derived and was a volunteer educator at the Marine Mammal Center in Sausalito. Tom is a member of the National Marine Educators Association and shows a PowerPoint presentation, "The Secrets of Dolphins," to libraries, schools, civic groups, and community colleges. After publication of his trilogy, the California Writers Club honored him with the Jack London award, and the Bay Area Independent Publishers Association named "The Dolphins' View" the best science fiction story of the year.

Tom moved to Florida in 2009. Cupid’s arrow pierced his heart when he least expected it. So he lifted Sandy in his arms as he walked along the sand and married her on the beach in Kauai. Entering senior years, he was amazed to find it the happiest time of his life. Love has something to do with that. You don’t have to make a ton of money either. Just follow your dream. Hope you enjoy “The Great Dolphin Escape.” 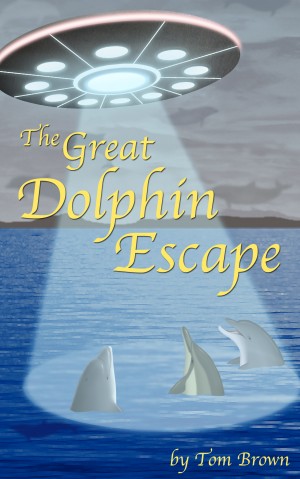 The Great Dolphin Escape by Tom Brown
Price: $2.99 USD. Words: 64,810. Language: English. Published: July 27, 2014. Categories: Fiction » Science fiction » Adventure, Fiction » Fantasy » Epic
A dolphin strands on the beach. Released back into the ocean, two dolphins join him on a great quest to solve environmental problems. They meet aliens with advanced technology who help them undergo a transformation and give them the ability to communicate. But the dolphins must solve their problems themselves when they encounter their most dangerous adversary: man, the master of their planet.

You have subscribed to alerts for Tom Brown.

You have been added to Tom Brown's favorite list.

You can also sign-up to receive email notifications whenever Tom Brown releases a new book.