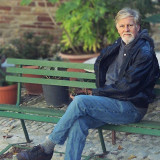 Berkeley F. Fuller (now “hyphenated” with his spouse’s former last name to Fuller-Lewis), was born into a career Navy family which bestowed on its two kids a weird genetic mix of New England Yankee (“Crankee”)-dom and Poor-But-Noble Virginia “blood,” (more of the former than the latter!)

Being a Navy Brat meant constant changes of locales, homes, schools but usually not of “friends,” since even then Berkeley was an extreme oddball as well as excruciatingly shy and thus rarely had “friends” of much merit to lose!

Fortunately however, his father finally retired and Berkeley got settled in one place for all of High School. He was sent to a superb public one which taught him extremely well how to read, research, love the arts, think and write. And again the gods smiled! For those skills led to his (shocking to him) admission to Harvard College, from which (even more shocking) four years later he graduated!

Whereupon, having cluelessly Not Noticed the Vietnam War then raging, he barely avoided becoming Army cannon fodder, instead doing a dicey end-run (enlisted) into the U.S. Air Force. There after a few months of comic mis-adventures, it noticed his skills and actually put him into the perfect job: as a B-52 bomber unit Historian with the then-fabled Strategic Air Command.

In that four-year gig, Berkeley interviewed everyone from General officers to aircraft mechanics, data-gathered and wrote full time, published quarterly top secret tomes and learned much more about research, writing and dodging arcane “political” bullets—all while still documenting a balanced view of reality. In short, there he discovered his unique gift for absorbing, culling and accurately summarizing vast amounts of complex information. Heady stuff for a 25-year old!

Post-military, he “used” the above skills to boringly coast along through a variety of frustrating, venal, lowlife gigs—working in various advertising agencies as a writer, then salesman (oh, right “Account Executive).” Re: that he quips: “Selling advertising seems the closest thing there is to pure con-artistry. That’s because (a) there’s often no “there, there” (no real product of value), and also the clients—while gut-level knowing that—also (b) believe that they HAVE to pay for advertising, since it’s the Thing To Do. It was so strange working in a situation where no one has their heart in anything and yet it’s VERBOTEN to ever comment on that!

Subsequent research / writing / management gigs (years-long each) included helping run a law firm, doing the marketing for a large clinic and hospital, and then—raising himself to an even higher level of incompetence—taking a crack at being a startup company founder (multi-tasking entrepreneur). The latter effort, both idealistic and full of potential, was effectively sandbagged in 2008, when that cadre of criminals known as “Wall Street” extended their lunatic/reckless gambling “a bridge too far”—crashing the entire economy and spooking away one final badly needed tranche of investors.

Meanwhile and all across his mortgage-paying “career,” Berkeley wrote “on his own”—poetry, short stories, a “tell-all” memoire, plus endless other creative projects. “Oscar—the tramp who was a Prince” is one of the latter, commemorating one of the most beautiful souls ever met on this earth, one in feline form.

He lives (and writes) today with the “husband of his dreams”—another artist, musician, writer and editor—in a tiny Oregon town, far from the madding crowd and in personal and artistic bliss! 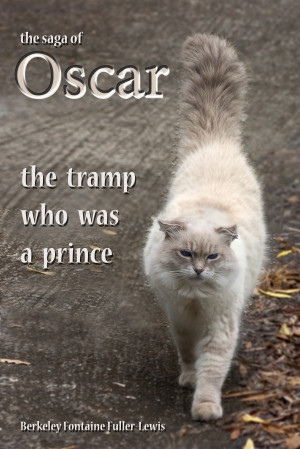 The Saga of Oscar — The Tramp Who Was A Prince by Berkeley F. Fuller-Lewis
Price: $4.99 USD. Words: 6,950. Language: English. Published: March 26, 2020. Categories: Nonfiction » Biography » Personal memoir
Living high in the upcountry hills of Hawai’i’s Big Island, I once had the luck to meet a truly evolved cat. Perhaps good karma brought him—nearly starving and dying of an ear mite infestation. He looked so trashed, I couldn’t then see his physical beauty and thought it was I who was rescuing him. But whatever kindness I’d paid him was dwarfed by years of relishing his sweet and very funny soul. 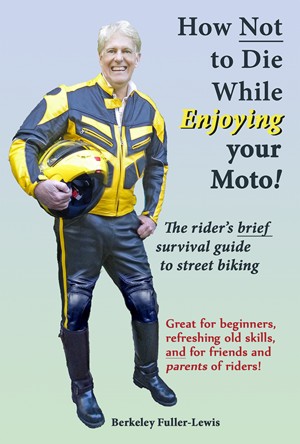 How Not To Die While Enjoying your Motorcycle by Berkeley F. Fuller-Lewis
Price: $1.89 USD. Words: 8,820. Language: English. Published: October 14, 2015. Categories: Nonfiction » Sports & outdoor recreation » Motorcycling
Street motorcyclists: this book may change the way you think, plan, focus and ride your bike. It suggests that: "Nearly all motorcycle accidents are the 'fault' of the rider" – in that all too many bikers often unknowingly put themselves in entirely-avoidable harm's way, just for lack of knowledge. In highly readable form, This book supplies that knowledge – for thrilling yet much safer riding

You have subscribed to alerts for Berkeley F. Fuller-Lewis.

You have been added to Berkeley F. Fuller-Lewis's favorite list.

You can also sign-up to receive email notifications whenever Berkeley F. Fuller-Lewis releases a new book.