The NCJFCJ is one of the largest and oldest judicial membership organizations in the nation. Also known as the Council, we serve an estimated 30,000 professionals in the juvenile and family justice system including judges, referees, commissioners, court masters and administrators, social and mental health workers, police, and probation officers.

For those involved with juvenile, family, and domestic violence cases, the Council provides the resources, knowledge and training to improve the lives of families and children seeking justice. The NCJFCJ resources include:
- Cutting-edge training
- Wide-ranging technical assistance
- Research to assist family courts
- Unique advanced degree programs for judges and other court professionals offered in conjunction with the University of Nevada, Reno and the National Judicial College

- Child Victims Act Model Courts Project–a network of 36 Model Courts that serve as models and mentors to jurisdictions nationwide
- Juvenile Justice Model Courts–a network of 12 courts that seek to improve practice in delinquency cases through implementation of the Juvenile Delinquency Guidelines
- Juvenile Drug Court Training and Technical Assistance Project–working in collaboration with Office of Justice Programs to help juvenile drug courts implement or enhance their juvenile drug courts
- National Resource Center on Legal and Judicial Issues–a partnership between NCJFCJ, the American Bar Association and the National Center for State Courts that delivers critical training and technical assistance to jurisdictions around the country, including NCJFCJ’s foundational judicial leadership curriculum and training evaluation guide and toolboxes
- National Center for Juvenile Justice–NCJFCJ's research division, based in Pittsburgh, Pa., is the country's only non-profit research organization dedicated to the juvenile justice system

During the past eight decades, the NCJFCJ has grown and evolved to meet the changing needs of our society. However, the organization’s mission has remained unchanged: to continuously improve the family court system and court practices and to raise awareness of the core issues that touch the lives of our nation's children and families.

A non-profit, 501(c)(3) corporation, the NCJFCJ relies on funding from federal and state grants, private foundations, and generous members and donors.

The NCJFCJ is registered in the U.S. Patent and Trademark Office as a trademark of the National Council of Juvenile and Family Court Judges. 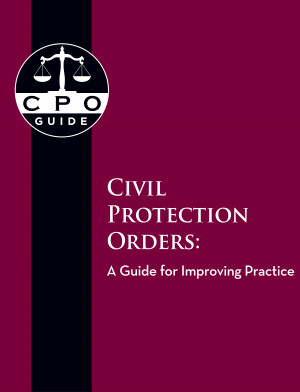 You have subscribed to alerts for National Council of Juvenile and Family Court Judges.

Would you like to favorite National Council of Juvenile and Family Court Judges?

You have been added to National Council of Juvenile and Family Court Judges's favorite list.

You can also sign-up to receive email notifications whenever National Council of Juvenile and Family Court Judges releases a new book.