Nicholas Kontis was born in Greece on one of the most breathtakingly beautiful islands in the world, Santorini. He was brought up in the cultural capital of the Americas, San Francisco. From a very young age, he developed a passion for travel as he shuttled between Athens and his California home during summer vacations. At age 12, he learned the meaning of travel immersion as he slept on couches in various relatives’ homes and learned to bake his own bread.

At age 19, Nick did his first European stomp. He rented a car with two friends in Nice, France, and later participated in the annual “Running of the Bulls” in Pamplona, Spain, where he emerged unscathed.

But it was a two-month trip to the Greek Islands at age 24 that truly changed his life. On idyllic Ios, he met a Swedish couple who swayed him to forfeit his return ticket home to embark on the journey of a lifetime. In the months that followed, he crossed the Middle East and the Indian subcontinent, traversed Southeast Asia, traveled overland in Australia from Darwin to Sydney and made his way across the South Pacific. Travelling the globe by train, plane, bicycle, boat and thumb (hitchhiking), even saving a baby in Bangladesh, Nick embraced a lifelong affection for travel.

Upon returning to his native San Francisco with no job prospect in sight, Nick launched the first successful travel agency in the United States that specialized in discount around-the-world airfares. Before long, he had been featured on Arthur Frommer’s travel TV show and Peter Greenberg’s radio show … from Istanbul. Lonely Planet founder Tony Wheeler called him the “father of around-the-world airfares.”

Today, Nick is an award-winning travel journalist who writes for numerous travel publications. He is proud that many fellow writers and travel specialists cite him as an inspiration in their decisions to pursue careers in the travel industry.

Where to find Nicholas Kontis online 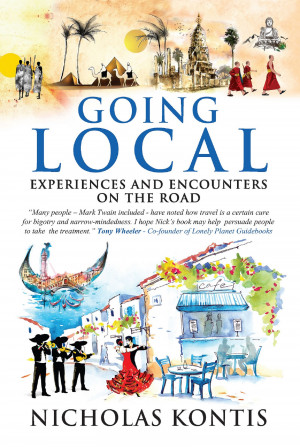 Going Local Experiences and Encounters on the Road by Nicholas Kontis
Price: $2.99 USD. Words: 68,090. Language: English. Published: October 12, 2016. Categories: Nonfiction » Travel » Amusement & theme parks, Nonfiction » Travel » Road travel
At a time when so many people are just checking things off a bucket list, other travelers are finding that they want more. Going Local explores the whys and how to’s of really experiencing an area and its culture through the people who live there. Includes real life travel stories from both experts and everyday folks.

You have subscribed to alerts for Nicholas Kontis.

You have been added to Nicholas Kontis's favorite list.

You can also sign-up to receive email notifications whenever Nicholas Kontis releases a new book.