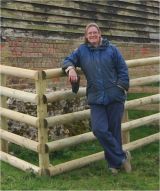 I live in the middle of rural Suffolk, UK, with a slinky black cat who's far too clever for her own good.

In my spare time, I'm an amateur historian/archaeologist, and in non-work daylight hours am usually out on a field somewhere with a metal detector and/or a trowel. I've added quite a few things to the Heritage England Record and the Portable Antiquities Scheme; but what really fascinates me is the stories behind the artefacts.

My first historical novel is about the story of a local boy made good - Wimer the Chaplain was born in Dodnash in Suffolk of a poor Saxon family, but made it to be a confidant of Henry ll, holding down the job of High Sheriff for all Norfolk and Suffolk. Then he gave it all up and came home to found a Priory... finding the original site of that Priory (not where it's shown on the map) is still one of my proudest discoveries.

I also have a series of short stories about Henry Baker, a boy who finds a magic pencil on the way to school - I have no idea where these come from, but I enjoy writing them :)

I hope you find as much pleasure in my books as I get from creating them. I've added my Twitter account so you can contact me; I also have a Facebook page under my name.

Thanks for reading!
Nicky.

When did you first start writing?
Well, I've always been a story teller, as far back as I can remember. Poetry has, from time to time, forced its way out through me too. But I first started writing my historical fiction as a result of my archaeology hobby. You see, I'd found this previously undiscovered Priory, which led me into relearning Latin, so I could read charters and documents written at the end of the 12th century, and figure out what was going on. Then this man called Wimer kept popping up, and his life-story became so compelling that I had to put it in book form. The Henry stories started when I was letting Wimer incubate between edits - I had a full-scale writing habit by then, and a void!
What are you working on next?
I'm working on the Wimer successor novel at the moment, where Wimer's adopted son Jean takes on the might of the 13th Century establishment, to stop them killing the Priory that Wimer built. He also discovers along the way that he wasn't meant for a vow of celibacy...
Then Henry is still demanding attention too, with the second volume of 3 stories due out imminently. I shall try and save the next batch of stories until I've finished Jean's novel, but Henry can be very insistent!
Read more of this interview.

Where to find Nicky Moxey online 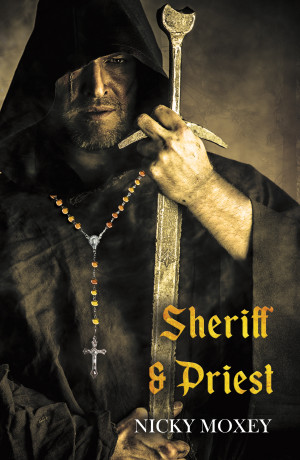 Sheriff and Priest by Nicky Moxey
Price: $5.99 USD. Words: 94,150. Language: English. Published: October 15, 2017. Categories: Fiction » Historical » Medieval
In 12th Century East Anglia, poor Saxons stay poor. It takes an exceptional one to win Henry II's friendship, and to become High Sheriff of Norfolk and Suffolk. Falling foul of the King's relationship with a'Becket, he is excommunicated 3 times, twice by a'Becket, and once by the Pope. That, and his love for Ida, guarantees him hell, unless he does something spectacular in the way of penance...

You have subscribed to alerts for Nicky Moxey.

You have been added to Nicky Moxey's favorite list.

You can also sign-up to receive email notifications whenever Nicky Moxey releases a new book.