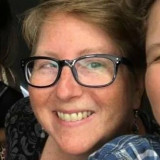 Angelic Rodgers currently lives in southern Arkansas, with her wife, two cats, and her best buddy, Sophie the dog.

Her writing focuses on a diverse cast of characters, including vampires, voodoo priestesses, lesbians, gay men, straight cis folks, and even an academic or two.

The Olivia Chronicles was developed over the years that Angelic taught the novel Dracula in her courses. With each semester, more questions about the secondary characters in Stoker's novel, primarily the identities of the three mysterious women in Dracula's castle, led to the first novel in the series, Blood Sisters. Set in current-day New Orleans, the series follows the attempts by Olivia Holmwood to be reunited with the loves of her life, taken from her by Van Helsing. As the series progresses, the lines of Stoker's story become crossed with the fictional story of the immortal Marie Laveaux. The series will continue in late 2018 or early 2019 with the anticipated release of book 4: Whitby. This book will focus on the events prior to the events in Dracula and will explore not only the relationship between Mina Harker and her close friend Lucy Westenra, but also on the origins of Renfield.

Angelic's upcoming novel, Elegant Freefall, is a departure from the series. In Elegant Freefall, you'll meet Sylvia Townsend, the broken-hearted and single literature professor whose career focus is disrupted when she falls in love with her colleague Lilian Danvers. This stand-alone contemporary lesbian romance will be released in time for your summer poolside or beachside reading.

Do you remember the first story you ever wrote?
The first story I ever wrote was probably an assignment in elementary school. I seem to remember being asked to write a story about early colonists and I wrote mine as a diary of a girl my age. My teacher asked to send it to Stone Soup, but if it ever appeared in the magazine I never knew it.

I went through a poetry phase in my early teens but returned to fiction. My first attempt at a novel was when I was around 12; I have it in a drawer even now, the handwriting on the wide-ruled paper is characteristically loopy. The story was inspired by an odd outbreak of polio in Switzerland that actually happened in the early 1980s. I was into the Omen books and movies then, and instead of an anti-Christ, I postulated that Hitler had never died and his son was now trying to take over by launching biological warfare that looked like random outbreaks. I rather doubt I'll finish that one, but who knows?

In college, I worked on a novel that reimagined my mother's life had she not stayed married to my father; that one got convoluted and turned into a weird murder mystery that rambles into nothingness.

Like most writers, I have several unfinished novels in files. That's just part of the game.
What's the story behind your latest book?
My upcoming book, Elegant Freefall, started because I read a lesbian romance with a protagonist who was a professor who got involved with a student. As a professor myself, I set out to get rid of the "teacher-student" trope (which frankly grosses me out) to explore an academic romance with two adult women who are peers. I didn't want any big coming-out moments, either.

The current draft is quite different from the original; in part these changes are due to an agent's advice that infidelity is hard to sell, but even more so the changes came about because I retired from teaching and am now taking time to revise the story so that it focuses less on plot-twists and more on authentic character development. The protagonist, Sylvia Townsend, has similar identity questions that I had late in my career as an academic, and the novel has been a good way for me to reflect on the difference between what she needs versus what she thinks she wants.

I do have a start on a spin-off of that book which features a minor character from Elegant Freefall, so I'm excited to see what folks think about Sylvia and the character of Andi.
Read more of this interview.

Where to find Angelic Rodgers online

You have subscribed to alerts for Angelic Rodgers.

You have been added to Angelic Rodgers's favorite list.

You can also sign-up to receive email notifications whenever Angelic Rodgers releases a new book.