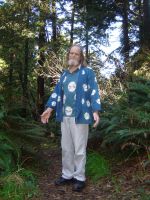 Author JC Worthington, RN was born and raised in Palo Alto, California. He became a registered nurse in 1985 while working on the Spinal Cord Injury Ward of the Palo Alto Veterans Administration hospital. John values his beginning as a rehabilitation nurse greatly, as it helped focus him on looking on ways to live life to one's fullest. Worthington has also been a nurse within acute care, as well as home health and hospice settings. JC Worthington started his own home care nurses registry, Worthington Respite, specializing in serving children and young adults with severe disabilities to remain healthy, active and happy in both home and community-school activities. Worthington Respite remains a vendored In-Home Nursing Care provider within the California State Regional Center system. John worked as a camp nurse, at a local camp for disabled children and young adults, Camp Rubber Soul. JC Worthington also has worked as a MDS Coordinator, Director of Nurses, CNA Supervisor and Charge Nurse for the local long term care facility; and as well, John has worked for the local Middle School, where he now lives in Northern California.

When in college Worthington self-developed an alternative learning method, The Bubble Method of Learning, allowing John to raise his midterm and finals scores up to the high As, which he was able to otherwise get on quizzes! John has taught his self-created learning method in college, high school and middle school classes. The Bubble Method of Learning is a holistic, visual, association method of learning, which utilizes both the right and left brain to learn more completely. 'Bubble Learning' allowed JC to retain what was learned more thoroughly; because, the whole topic, and all its details, were both understood adeptly! In college science classes John frequently came up with 'the right questions', which at the time were the 'holes' in the current understood scientific knowledge, of the physiology of human beings. JC Worthington has an ability to see the whole picture, including some things others do not; and, herein is wherein truth may arise from! Worthington is known as a self-starter who can find solutions to problems, when others can not.

Worthington learned and refined much of his writing skills while rushing between patents as a nurse. John found the required nursing narrative charting to be invaluable; because, what nurses must chart is exactly what is seen, and including all the psychological and mental symptoms and behaviors. Nurses must show critical thinking during the whole process, resulting in a conclusion of sorts, that is reflected in the treatments, medications, counseling and reporting, which is all then fully charted! Nurses must see and exactly describe symptoms, from the most subtle to the most bold, in clear and understandable language.

But writing what one sees is not all that is required! Nurses must fully understand, enter into, and work within whatever psychotic or delusional outbursts that may occur. To be truly proficient as a licensed nurse, you must be able to critically observe a whole situation at once and over time. Within this registered nurses must be able to interact well in any situation; and, do this while reaching into the greater depths of all the intricacies of humanity, so as to facilitate the healthiest results. Doctors make diagnosis and write orders; but, it is the licensed nurses who must fully integrate themselves successfully into the whole life of their client-families, ...wherein life truly lives!

As a writer, JC Worthington wrote and self-published his book, Aquarian Physics, in only around one and a half years. Aquarian Physics at 600 pages is an accomplishment of note, as most of it was written while JC worked, averaging around 70 hours a week between his two nursing jobs. Aquarian Physics furthers the physics of Einstein, Buddha and JC. The chapter "Simple Relativity" clarifies Time, Motion, and Gravity, and much, much more! Simple Relativity also outlines the equation T=V=G=M=E=C, or Time equals Motion (Velocity) equals Gravity equals Mass equals Energy equals Consciousness! According to David R. Hawkins' "Map of Consciousness", John has measurably improved his conscious enlightenment levels more-than an unheard of 800 points, on Hawkins 1 to 1000 scale. This conscious enlightenment was achieved by using the self-developed methods of JC's mentor, Dr. Lee Vagt, who holds the key to "The Working Man's Way To Enlightenment" Hawkins notes most persons raise their conscious numbers around 5 points out of 1000 during their whole life; that is, if they raise their enlightenment levels at all! JC Worthington actually raised his enlightenment numbers by 600 points while discovering and writing Aquarian Physics, as Aquarian Physics reflects!

This all is pure-truth; and, in-fact Worthington and Aquarian Physics preach to not believe a word his writes; that is, until it becomes scientifically measurable pure-truth within your life and self. Aquarian Physics also greatly advances the 'new' empirical science of Muscle Testing, for achieving the very greatest human health, FREEDOM, pure-truth and strength. Scientific Muscle Testing, or Holding God's Hand In Return, allows human beings and humanity to recognizing the Maintaining Self natures of the ALL of our universal universe-god, which is what the 'strength' events of Muscle Testing accurately measures. Muscle 'weakness' events are then a measure of the Non-Maintaining to Self natures of the everything of disease, Illusion, falsehood and weakness within human reality! Thus, by recognizing the Illusion that Buddha spoke of, and that Jesus and Muhammad acted against, and by bringing Illusion into the light of the this-day, The American Dream of The American Way of Liberty and Justice FOR ALL, US-A!!, US-ALL, We The People of humanity ALL can and will be achieved on Earth! Along with this and perhaps most importantly though, Aquarian Physics explains why Dr. Vagt's 'Lee-Ways' work so very effectively to bring greater human health, including enlightened conscious health.

Scientific Muscle Testing is easy to learn and use in work and home life; and, it allows one to measure what lives as truth-strength-FREEDOM-health, versus what exist as falsehood-weakness-Illusion-disease, within human beungs and humanity! Muscle Testing is effectively "The Science of Holding God's Hand In Return"! JC says Trust AND Verify, and Test Me On It!

JC's Spirit, Soul and Heart Releases are soon to be themselves released. Worthington also has a novel about a disabled boy that is two-thirds written. Additionally, John has numerous unpublished works that include poetry, lessons of life and poetic lessons of life! JC Worthington has developed and taught courses on alternative learning methods, massage, healing and energy focusing techniques, to name a few. John C. Worthington has lived and worked in rural coastal Northern California for 25 years, and enjoys kayak surfing, bicycling, walking in nature, writing and family. For more on Aquarian Physics, Muscle Testing, or for a link to the Aquarian Physics e-book site, the “AquarianPhysics.com” web site is recommended. JC Worthington, RN is the sole discoverer and writer of Aquarian Physics; and, the soul owner of One Peace Press, which published Aquarian Physics. Worthington's philosophy of writing is to stay engaged within life always; for, life is wherein the truest and best lessons and stories truly live! Accurately Muscle Test It Accurately! 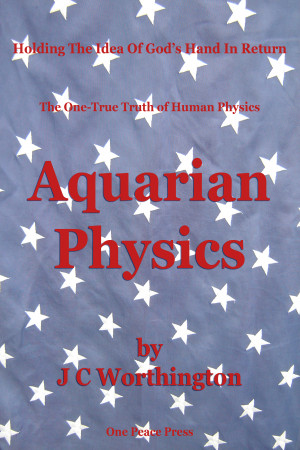 Aquarian Physics by J C Worthington
Price: $9.99 USD. Words: 425,950. Language: English. Published: October 13, 2012. Categories: Nonfiction » Science & Nature » Physics, Nonfiction » Health, wellbeing, & medicine » Medicine
Furthering the understandings of the Physics of Einstein, Buddha, and JC. Time = Motion = Gravity = Mass = Energy = Consciousness. Gravity Is Motion! Time Is Motion, Too! Turn The Other Cheek To Gain A Better More Balanced View! OUR Universe-God ‘IS’ ALL PLACES AT ONCE! Muscle Testing Is As Natural and Known As A Baby’s Cry or Coo. LOVE Physically-Factually-Truly, Makes The World Go Round!

You have subscribed to alerts for J C Worthington.

You have been added to J C Worthington's favorite list.

You can also sign-up to receive email notifications whenever J C Worthington releases a new book.