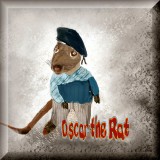 It's a long story, and I figure I should clue you in. Oscar Rat is a virtual rat, my other persona. But DON'T TELL OSCAR, he thinks he's real.

One time, back in the seventies, I lived in Waikiki, Hawaii. I had a good job with computers, Data Processing Supervisor for a Credit Union
Service Company. But, being an alcoholic, I spent most of my money in bars, and lived in a one room apartment in an old ramshackle building.

One day while sitting, reading, and taking it easy, I heard a noise in the bathroom. Checking it out, I found a large rat thrashing around in
the toilet bowl.

Drunkenly, I fished him out, put him in the bathtub, and splashed him with shampoo and warm water while scrubbing him with a long handled
brush. Luckily there hadn't been any turds in the bowl. Then I waited until he dried some, and put him outside in the grass. He looked so
embarrassed and discombobulated as he staggered away.

About a week later, the same thing happened with the same rat. That time, after putting him outside, I took to keeping a small dish of water
next to the toilet and closing the lid.

After a few days, I seemed to see motion in the bathroom out of the corner of my eyes. It could be a hallucination, I thought. I had spent
a time drinking saki make from wood alcohol in the past, and was used to them.

To make certain, I started putting table scraps in another bowl, next to the first. Sure as hell, it was that rat. To make the story shorter, I
fed him and we became friends. He even built a nest, of my socks, under the refrigerator -- which I found later. I named him Oscar after Oscar
Madison of television fame.

I can't call him a pet, since he wouldn't let me pet him, but more of a companion. Oscar would even sleep under a corner table, in plain sight.
Often he'd cross the livingroom and I'd say something like "How you doin' Oscar?" with him smiling back at me. After four or five months,
Oscar stopped coming. I think he felt like moving on, like rats are wont to do, and pray no cat got him.

He writes only rat oriented stories. Since then
Oscar has full membership on half a dozen writing boards, and has sold stories and won small contests under his own name.

He has a family: his wife, Malodor Skunk, a homebody that tries to control his antics; also her niece, Nancy Skunk, a teenager who has her
own teenage troubles.

Oscar reminds me of the stereotype of a used car salesman. He can pat you on the back with one hand, and pick your pocket with the other. He's
always looking for that angle. The rodent can be a good friend, but will often revert to being himself, a rat.

Right now, Oscar works for the Venerable Rat Archives, a vast repository of historical data about ratkind, fiction and fact compiled since long before humans dropped out of trees. They pay him a monthly subsidy to
research and add to the Archives. So far, he has well over a hundred rat oriented works, from short to novella length. 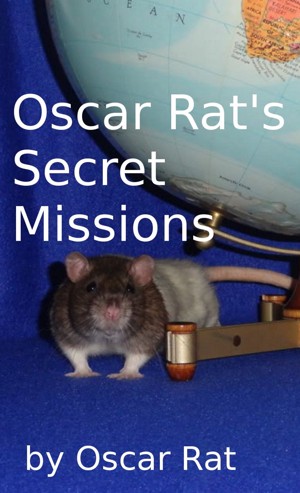 Oscar Rat's Secret Missions by Oscar Rat
Price: Free! Words: 14,560. Language: American English. Published: September 7, 2012. Categories: Fiction » Fantasy » Short stories, Fiction » Humor & comedy » Satire
Oscar Rat has worked for two Presidents of the US as a Rodent Advisor and Troubleshooter. From an office at the White House, he's in constant contact with rodents around the world. In his Troubleshooting capacity, he's been sent to many countries to influence rats and other rodents to gain their trust and further the needs of the United States. This is a compilation of three of those missions. 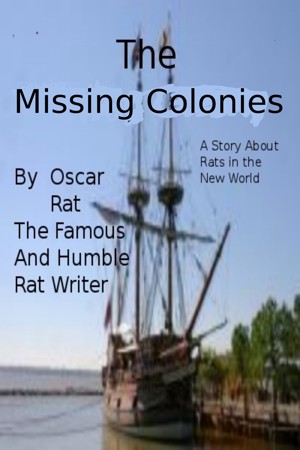 The Missing Colonies by Oscar Rat
Price: $0.99 USD. Words: 30,500. Language: American English. Published: August 31, 2012. Categories: Fiction » Fantasy » Historical
A shipload of repressed Christians leave Bavaria to relocate to the New World. Upon arriving they find no sign of prior colonists or natives, not even a stray footprint. Eventually they find there are, indeed, natives -- human-sized intelligent rats. The short novel ( 13,000 words ) is about how the two species adjust to each other, eventually settling their differences to form a new society.

You have subscribed to alerts for Oscar Rat.

You have been added to Oscar Rat's favorite list.

You can also sign-up to receive email notifications whenever Oscar Rat releases a new book.