I’m a 53-year-old former journalist, married with two children.
I grew up in a small town called Alnwick, Northumberland, the ancestral seat of the Duke of Northumberland. Alnwick Castle and the town has featured many times on British TV and international films (Blackadder, BBC's Dracula, Harry Potter, Vera, Robin Hood: Prince of Thieves, The Hollow Crown: The Wars of the Roses, Downton Abbey, Transformers: The Last Knight etc etc).
I grew up in an Irish Catholic family who moved from Draper's Town, Northern Ireland, to the UK, went to RC school, then joined my father's printing company.
From my teens I trained in Karate and competed at major events, winning medals and trophies as well as enduring losses at the hands of better fighters than I. Over the years I've trained in TKD, Wing Chun, Ninjutsu, Kali - stick and knife fighting, Ju-jutsu, kickboxing - all under excellent instructors.
I have ten black belts (four in one system, three in another etc) in various martial arts. I was the editor of an online martial arts magazine and used to hold fight shows… including cage fighting events with the aristocracy and ran an online TV company called Combat Sports Live.
At age 23 I cut four fingers on my left hand off in an industrial accident. Three were re-attached but I lost the little finger.
I then went back to college and became a journalist.
I've worked on a number of news titles throughout the UK and was the editor of a major online martial arts magazine, and ran a PR company, a self-protection training company as well as doing event management.
Recently I've been involved in political PR and social media marketing as well as writing books. 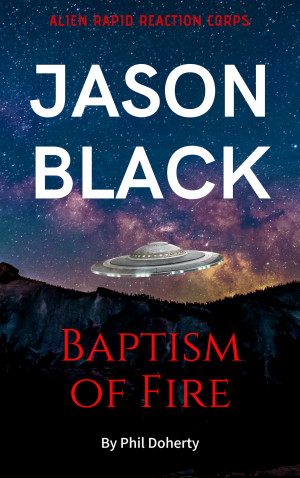 Alien Rapid Reaction Corps: Baptism of Fire by Phil Doherty
Price: $6.50 USD. Words: 81,430. Language: British English. Published: January 22, 2019. Categories: Fiction » Young adult or teen » Science Fiction, Fiction » Adventure » Action
A secret war is being waged against Earth by Grey aliens using genetic manipulation of humanity until it can be enslaved through telepathic bondage into the mysterious Mesh. Jason Black, a streetwise 12-year-old, is thrown into a world of aliens, UFOs and mass abductions when enrols with the Alien Rapid Reaction Corps.

You have subscribed to alerts for Phil Doherty.

You have been added to Phil Doherty's favorite list.

You can also sign-up to receive email notifications whenever Phil Doherty releases a new book.