Colorado native Edward Cozza is a fiction writer, speaker and humorist. He is a teller of human tales and enjoys public speaking with an audience who believes in taking the time to unplug, connect and being mindful of time spent with loved ones. He now lives in Southern California with his wife and dogs, sometimes with a bourbon nearby

Edward left a successful career in business to dive headlong into the lives of his characters in his debut novel Nowhere Yet: Grant, Rex, Annie and Kat – four, forty-something friends who meet up in Palm Springs after many years apart. Their plight is like ours: How did we get here? Where will we end up?

Since his first book, “Nowhere Yet,” came out in 2012, Edward Cozza’s life has been filled with what he likes to call “wow” things.
“Being honored with three Beverly Hills Book Awards was a ‘wow’ thing,” said the Encinitas author. “Going to New York to receive the IPPY gold medal from the Independent Publishers was a ‘wow’ thing, and having a bourbon with Chef Dean Fearing ­— someone I’ve admired forever — now, that was definitely a ‘wow’ thing.”
To many readers, Cozza’s debut novel was a “wow” thing itself. The story, about old friends and lost loves reuniting during a long weekend in Palm Springs, is reminiscent of “The Big Chill,” and it’s easy to relate to and recognize people you know in the four main characters.
Because those characters remained with their creator long after he finished writing about them, they’re returning in a sequel, “Near Somewhere,” which is scheduled for publication next month.
“The first book started out as a short story and just got longer and longer,” explained Cozza. “So I decided it would be the first of a trilogy. But now that ‘Near Somewhere’ is done, I actually changed the inside cover to ‘Book Two of a Series’ just in case I need more than three. That may mean I am now — still? — out of control.”
Cozza’s self-deprecating humor and enthusiasm have made him a popular speaker, and his standing-room-only appearance at Warwick’s helped propel “Nowhere Yet” into the store’s Top 50 Bestsellers of 2012.
Or it could have been the fact that he writes so passionately about eating and drinking.
“I think food brings an element of realism into a story,” said Cozza. “When I was traveling for business, food and drink were major factors in protecting my sanity. Taking in slices of Americana was important to me, and that usually involved eating.”

“Near Somewhere” by Encinitas writer Edward Cozza continues the story of the characters in “Nowhere Yet.”— Courtesy photo
In fact, food plays such an important role in Cozza’s appreciation for the “finer” things in life that the foreword to his new novel is written by Chef Dean Fearing of the Ritz-Carlton in Dallas, who is often referred to as “the father of Southwestern cooking.”
“I met Dean in Dallas for a ‘Bourbon and Book’ event I was doing, and it means so much that he wrote this for me,” Cozza said. “If you read his splendid cookbook, ‘The Texas Food Bible,’ you realize how important food is in connecting people. Having a room service salad, even a good one, doesn’t help you connect — not to a person or a culture or a true flavor. There’s nothing worse than a table for one.”
Cozza’s characters often congregate around food and drink, just like the author himself. Because traveling for work never allowed much time for sightseeing, Cozza spent much of his free time in restaurants and bars, trying out regional specialties and getting to know the locals. These experiences gave him a deep respect for bartenders who, according to Cozza, “see all, know all.”
As he recalled, “Even if I wasn’t drinking, bartenders often helped save my far-from-home soul. That’s probably why there are always bartenders in my books. I owe them a lot — spiritually, not monetarily. I always pay my tab.”
These days, Cozza gets to travel more for fun and to introduce readers to his books. His next trips are to Cincinnati and New York, both of which, he pointed out, have great local fare. He’s looking forward to feasting on chili in Cincinnati and Italian food in New York.
“The weight-loss program will be on hold for those,” he laughed, “but will be amping up when I get back.”
He’s also hoping to head to Oakland, St. Louis, Cleveland, Minneapolis, Boston, Pittsburgh, Washington, D.C., and Miami — cities of the only Major League Baseball parks he hasn’t yet visited. Then he’ll start on the Minor League parks.
Travel has become a real joy for Cozza, who is excited to spread his “Unplug and Connect” message. He wrote both of his books by hand in Moleskine journals, and strongly believes that, despite all the high-tech devices — or maybe because of them — our hearts are craving personal connection.
“We need to stay in touch and stay connected,” said Cozza. “I’ve heard from so many readers that they’re being emotionally impacted by being away from the ones they love and care about. Texts and emails just aren’t cutting it.”
Cozza will probably be making many personal connections on his next book tour, and is hoping, along the way, to also check off the eight states left to complete his bucket list item of visiting every state in the country.
“I need to come up with book signings in Hawaii, Alaska, Oregon, Idaho, Montana, North Dakota, South Dakota and Delaware. If you could help with those, that would be tremendous.”
You can see Cozza in person at a Warwick’s-sponsored event soon. Visit www.edwardcozza.com and follow him on Twitter at @EdwardCozza and Facebook at www.facebook.com/EdwardCozzaWriter.

Where to find Edward Cozza online 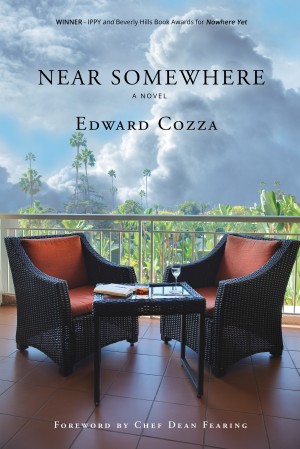 You have subscribed to alerts for Edward Cozza.

You have been added to Edward Cozza's favorite list.

You can also sign-up to receive email notifications whenever Edward Cozza releases a new book.