Prescott is an Information Technology and Security Specialist with over 20 years hands-on experience. His resume includes a wide range of technologies beginning with DEC Mainframes and Apple 512K systems along through the entire evolution of the Windows Operating Systems since Windows 3.1. Prescott’s current responsibilities focus in IT security, including incident management. He currently holds the GIAC Gold Security Essentials Certification (GSEC). GSEC certification ensures the holder has real-world security awareness in several areas of IT security including computer, network and software.
Prescott began his IT career with his father at Scientific Placement working on the DEC mainframes. After leaving Scientific Placement, he spent the next several years at Telecheck working in the Shared Global Services division, which handled real-time credit card transaction processing and settlements. His job responsibilities included credit fraud control and profiling to prevent credit card fraud as well as assisting authorities with criminal investigations. Prescott then spent two years at Mitsubishi Caterpillar Forklift America (MCFA) operating the desktop support for the Houston offices working for MIT Computers.
Prescott came to Baker Hughes 1998 in the Baker Oil Tools division where he supported field operations for the Eastern United States. After shared services were formed, Prescott went to work in Desktop Support where he was the on-site coordinator at Baker Oil Tools at Navigation Boulevard and Baker Petrolite in Sugar Land.
Prescott transferred to the Windows 2000 Migration Project where he was part of the team that designed and implemented the global transition to windows 2000, Active Directory and developed many of the current IT standards.
Prescott has also worked on several other small and large-scale projects at Baker Hughes during his career.
At the conclusion of the Windows 2000 Migration Project, Prescott transitioned into what is now the IT Tools Team. As a member of the IT Tools Team Prescott was responsible for virus incident management and security related software including the McAfee ePolicy Orchestrator. His responsibilities also included supporting and designing the McAfee products infrastructure. As a result, the IT Tools Team has greatly reduced the number of virus outbreaks ensuring that the corporate network is operational and secure. For the past five years, Prescott has focused almost exclusively on IT Security, Risk Management and Incident Response.
In addition to Prescott’s background in IT he is also an accomplished photographer having recently been published in several newspapers, magazines and a travel guide for San Antonio, TX.
Prescott’s lovely wife Alex is a practicing attorney and a Registered Nurse in the Houston area and they have two wonderful boys, Nicolaus and Zachary. Nico is named for Nicolaus Copernicus while Zach is named for Zakk Wylde, where one was an innovator in science and changing how we view our place in the universe, the other is known for his awesome and innovative work with the electric guitar and changing the style of play for heavy metal the world over.
Prescott attended Houston Community College and the University of Arizona in Tucson. Prescott has held several IT related certifications over the years now has a SANS affiliated GIAC Gold Security Essentials Certification (GSEC).

Where to find Prescott Small online 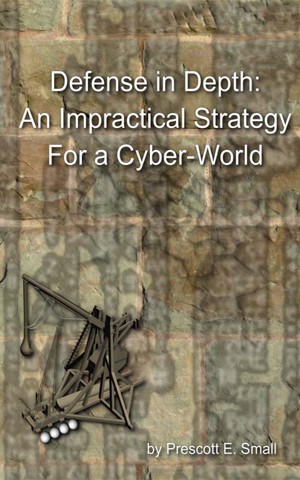 Defense in Depth: An Impractical Strategy for a Cyber-World by Prescott Small
Price: $2.99 USD. Words: 7,210. Language: English. Published: January 31, 2012. Categories: Nonfiction » Computers & Internet » Security, Nonfiction » Computers & Internet » Enterprise IT management
Businesses and Information Technology Security Professionals have spent a tremendous amount of time, money and resources to deploy a Defense in Depth approach to Information Technology Security. Yet successful attacks against RSA, HB Gary, Booz, Allen & Hamilton, the United States Military, and many others are examples of how Defense in Depth, as practiced, is unsustainable.

You have subscribed to alerts for Prescott Small.

You have been added to Prescott Small's favorite list.

You can also sign-up to receive email notifications whenever Prescott Small releases a new book.