R. J. Gruber Jr. is at once an artist and theorist, an entrepreneur and educator. As founder of the Political Animal Project, Mr. Gruber has launched a conservative political education campaign that seeks to integrate the first-principles of our Declaration of Independence into the blueprinting of tomorrow’s constructive political culture.

Mr. Gruber’s positive political vision was developed during the nearly six years he spent as Teaching Assistant to a great-souled, conservative professor of political thought, Dr. Elliot Bartky. Yet, rather than following his mentor into academia, he is translating the perennial wisdom of the West into popular formats that invite audience members to engage with the living roots of the American political tradition.

Recently returned to the Catholic Church, he lives with his wife and their two children in Cincinnati, Ohio. 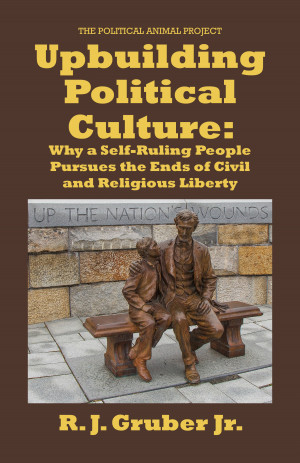 Upbuilding Political Culture: Why a Self-Ruling People Pursues the Ends of Civil and Religious Liberty by R. J. Gruber, Jr
Price: Free! Words: 11,810. Language: English. Published: June 13, 2018. Categories: Essay » Political, Nonfiction » Politics & Current Affairs » Current affairs
Mr. Gruber advances the debate on the future of conservatism by showing that a constructive political culture must preserve both the moral and material bases of the American Republic. This brief work uses Abraham Lincoln’s “Lyceum Address” to argue that the 22nd century will be won by directing our present vision toward the ends of both civil and religious liberty.

You have subscribed to alerts for R. J. Gruber, Jr.

Would you like to favorite R. J. Gruber, Jr?

You have been added to R. J. Gruber, Jr's favorite list.