Born in 1948 in Nitro, West Virgina to a mother and father of pioneer Texana lineage. Ancestry, 1/4 Swedish, 3/16 Cherokee, the other 9/16 of the purest of the pure 'poor white trash.'

Parents settled in Richardson, Texas in 1955. I attended Richardson schools 1-12 grades and graduated in 1966.

In the fall of '66 I enrolled in the University of Texas in Austin, Texas. As a course of study I concentrated on a well rounded curriculum, elementary imbibing of beer and liquor 101, intermediate marijuana experimentation which led to economics and marketing, and eventually, higher grade courses in international smuggling of marijuana from Mexico and LSD smuggling and sales from California to England and Germany. For electives music and dance grabbed my attention in the form of rock and roll, a smattering of country, and intensive beer barrel honky tonking, and chasing skirts, in other words, getting drunk/stoned/spaced as one can and will do if he is a reprobate, and I qualified as such, and messing around with the women. To be continued:

Who are your favorite authors?
Sir Aleister Crowley, Emmanuel Swedenborg, Theophrastus Bombastus Paracelsus of Hohenheim, Eliphas Levi, Edgar Cayce, Paramahansa Yogananda, Swami Vivekananda, Manley Palmer Hall, Edgar Allen Poe, Dr. Paul Foster Case, Israel Regardie, Mouni Sadhu.
Where did you grow up, and how did this influence your writing?
We traveled around in a trailer house until I was five. My first memories are of the artificial moons over Niagara, the hazy Smoky Mountains from the back seat of the car going west through Tennessee and staring up at the Milky Way, playing at my mother's feet and watching the blue smoke curl and wind around itself spiraling upwards from the ashtray/cigarette, My daddy was a pipeliner out of Texas working for Oklahoma Pipeline Construction traveling all over the country pushing as many as 30-40 welders going across country laying over 5,000 linear feet of 36' steel pipe into ditches up and down mountainsides, across and under rivers, through rock and swamp, rain, snow and cold, debilitating hot, gale force wind storms. He would put his clean khaki clothes on in the early morning darkness. Twelve, fourteen, sixteen hours later he got home and his face would be pitch black. Every day he would "hit the ground a running! Not hardly daylight but it's six o'clock!" I was born on the pipeline. I was burning rods and had a company badge before I could read or sign my name. I was born in Nitro, West Virginia. At two months we moved north and east toward New Jersey, New York, Massachusetts, New Hampshire and Maine and Canada. My daddy would pull the trailer house with our 1949 Oldsmobile '98 from one trailer park to another then another on down the line. As the work progressed, one mile or more each day, we would move every three to six weeks. This is how we lived until I was five. When jobs were done we would go back to Dublin, Texas. My mother was from Wilson community seventeen miles south and east of Dublin. Daddy was born at Cow Creek, five miles west of Dublin out by the way of DeLeon.These communities do not even exist any more. These people were true pioneers. Dock Kerley came into Comanche County in 1874 from Arkansas. He was one of the first settlers in Comanche County. I was privileged to be in attendance at his 100th birthday party in October of 1957. He died a few days after his party. Mother told me he was a real son-of-a-bitch. He was a womanizer and a hard drinker and a gambler and a barroom brawler. Dock Kerley was rumored to be the one who hanged Chap Howard from a tree and left him there for the feral hogs to eat his legs.. I remember my grandmother, Dock Kerley's daughter, washing clothes in large cast iron pots on an open fire back of the house using lye soap. I remember all these old ladies making quilts inside the Wilson community school house. I remember slopping the hog in the mornings and feeding the chickens at three every afternoon. Granddad would say, "Here, chick-chick-chick! Here, chick-chick-chick!" Daddy's mother and daddy both died in 1948, the year I was born. John August Knape was a Swede. Everyone said he was a fine gentleman. He found himself a young bride. She was Annabelle White and was born in Sulfur Springs, Texas. Everyone said she was lazy as sin!" This is where I come from. We would travel in the aluminum-sided trailer house. We would stay for a while. We would move on. From Texas we went to Louisiana, Shreveport, Baton Rouge, Covington, Cracker town . . .We went to Mississippi, McComb and Meridian . . . Alabama was next ,Bessemer. We crossed Tennessee, from Shiloh to Chattanooga. Pennsylvania was home all one summer...Back to Texas! Robstown, Refugio, Port Lavaca. A time in Dallas, Texas. We stayed in a trailer park over on Harry Hines Blvd. One more place we called home was Hobbs, New Mexico where my little brother, Anthony. was born. From Hobbs we went back to Mississippi. My sisters went to one school in one town for one day. We moved. They went to a different school in a different town the next day. Mother said, "Enough!" Daddy stayed pipelining in Mississippi. We went home to Dublin, I started first grade in Dublin. We moved to Richardson in 1955. Mother always said she had chosen to live in Richardson because of the reputation of the school district. I have been very well educated and if I have any talent as a writer, perhaps, this talent was nurtured as a child growing up in Richardson,Texas!
Read more of this interview. 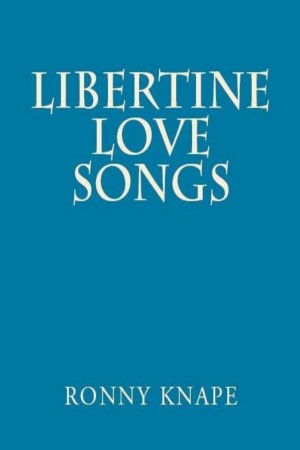 This is a collection of poesy, prosody, and prose divided into six chapters. The first two chapters are basically poems and short narratives of limerence, loss and longing, death and redemption, scandalous acts and the search for fulfillment. Chapters three through six are short stories. Love once again is a prevailing theme, the sixth chapter has elements of the occult.

You have subscribed to alerts for Ronny Knape.

You have been added to Ronny Knape's favorite list.

You can also sign-up to receive email notifications whenever Ronny Knape releases a new book.